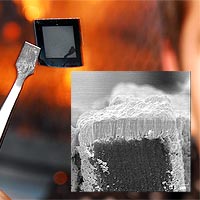 Jud Ready (not shown), senior research engineer at the Georgia Tech Research Institute, holds a sample of the 3D solar cells his research team has developed.

Unique three-dimensional solar cells that capture nearly all of the light that strikes them could boost the efficiency of photovoltaic (PV) systems while reducing their size, weight and mechanical complexity.

The new 3D solar cells capture photons from sunlight using an array of miniature “tower” structures that resemble high-rise buildings in a city street grid. The cells could find near-term applications for powering spacecraft, and by enabling efficiency improvements in photovoltaic coating materials, could also change the way solar cells are designed for a broad range of applications.

“Our goal is to harvest every last photon that is available to our cells,” said Jud Ready, a senior research engineer in the Electro-Optical Systems Laboratory at the Georgia Tech Research Institute (GTRI). “By capturing more of the light in our 3D structures, we can use much smaller photovoltaic arrays. On a satellite or other spacecraft, that would mean less weight and less space taken up with the PV system.”

The 3D design was described in the March 2007 issue of the journal JOM, published by The Minerals, Metals and Materials Society. The research has been sponsored by the Air Force Office of Scientific Research, the Air Force Research Laboratory, NewCyte Inc., and Intellectual Property Partners, LLC. A global patent application has been filed for the technology.

The GTRI photovoltaic cells trap light between their tower structures, which are about 100 microns tall, 40 microns by 40 microns square, 10 microns apart -- and built from arrays containing millions of vertically-aligned carbon nanotubes. Conventional flat solar cells reflect a significant portion of the light that strikes them, reducing the amount of energy they absorb.
Researcher with solar cell

Because the tower structures can trap and absorb light received from many different angles, the new cells remain efficient even when the sun is not directly overhead. That could allow them to be used on spacecraft without the mechanical aiming systems that maintain a constant orientation to the sun, reducing weight and complexity – and improving reliability.

“The efficiency of our cells increases as the sunlight goes away from perpendicular, so we may not need mechanical arrays to rotate our cells,” Ready noted.

The ability of the 3D cells to absorb virtually all of the light that strikes them could also enable improvements in the efficiency with which the cells convert the photons they absorb into electrical current.

In conventional flat solar cells, the photovoltaic coatings must be thick enough to capture the photons, whose energy then liberates electrons from the photovoltaic materials to create electrical current. However, each mobile electron leaves behind a “hole” in the atomic matrix of the coating. The longer it takes electrons to exit the PV material, the more likely it is that they will recombine with a hole -- reducing the electrical current.

Because the 3D cells absorb more of the photons than conventional cells, their coatings can be made thinner, allowing the electrons to exit more quickly, reducing the likelihood that recombination will take place. That boosts the “quantum efficiency” – the rate at which absorbed photons are converted to electrons – of the 3D cells.
Researcher with solar cell

Fabrication of the cells begins with a silicon wafer, which can also serve as the solar cell’s bottom junction. The researchers first coat the wafer with a thin layer of iron using a photolithography process that can create a wide variety of patterns. The patterned wafer is then placed into a furnace heated to 780 degrees Celsius. Hydrocarbon gases are then flowed into furnace, where the carbon and hydrogen separate. In a process known as chemical vapor deposition, the carbon grows arrays of multi-walled carbon nanotubes atop the iron patterns.

Once the carbon nanotube towers have been grown, the researchers use a process known as molecular beam epitaxy to coat them with cadmium telluride (CdTe) and cadmium sulfide (CdS) which serve as the p-type and n-type photovoltaic layers. Atop that, a thin coating of indium tin oxide, a clear conducting material, is added to serve as the cell’s top electrode.

In the finished cells, the carbon nanotube arrays serve both as support for the 3D arrays and as a conductor connecting the photovoltaic materials to the silicon wafer.

The researchers chose to make their prototypes cells from the cadmium materials because they were familiar with them from other research. However, a broad range of other photovoltaic materials could also be used, and selecting the best material for specific applications will be a goal of future research.

Ready also wants to study the optimal heights and spacing for the towers, and to determine the trade-offs between spacing and the angle at which the light hits the structures.

The new cells face several hurdles before they can be commercially produced. Testing must verify their ability to survive launch and operation in space, for instance. And production techniques will have to scaled up from the current two-inch laboratory prototypes.

“We have demonstrated that we can extract electrons using this approach,” Ready said. “Now we need to get a good baseline to see where we compare to existing materials, how to optimize this and what’s needed to advance this technology.”

Intellectual Property Partners of Atlanta holds the rights to the 3D solar cell design and is seeking partners to commercialize the technology.

Another commercialization path is being followed by an Ohio company, NewCyte, which is partnering with GTRI to use the 3D approach for terrestrial solar cells. The Air Force Office of Scientific Research has awarded the company a Small Business Technology Transfer (STTR) grant to develop the technology.

“NewCyte has patent pending, low cost technology for depositing semiconductor layers directly on individual fullerenes,” explained Dennis J. Flood, NewCyte’s president and CTO. “We are using our technology to grow the same semiconductor layers on the carbon nanotube towers that GTRI has already demonstrated. Our goal is to achieve performance and cost levels that will make solar cells using the GTRI 3D cell structure competitive in the broader terrestrial solar cell market.”