Electrons Caught in the Act of Tunnelling 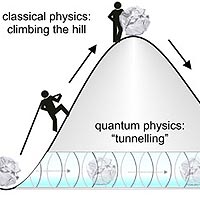 There are two ways of conquering a mountain. In classical physics, one must climb the mountain to get to the other side. That is not the case in quantum physics: objects can simply cross the mountain horizontally - by tunnelling through it.

We have to climb a mountain in order to conquer it. In quantum physics there is a different way: objects can reach the opposite side of a hill simply by tunnelling through it, instead of laboriously climbing over it. An international team of researchers working with Prof. Ferenc Krausz from the Max Planck Institute for Quantum Optics has now observed electrons in this tunnelling process. This effect is responsible for the ionization of atoms under the influence of strong magnetic fields. The electrons overcome the attraction of the atomic nucleus by tunnelling through a potential wall. The scientists used ultra-short laser pulses to show discrete stages of ionization in this process, each of which lasts 100 attoseconds - a fraction of a billionth of a second. The results make a significant contribution to understanding how electrons move around in atoms and molecules.

In the same way as gravity brings a body to a halt on the floor of a valley, the nuclear force (which binds protons and neutrons to form the atomic nucleus) and the electrical force (which combines negatively charged electrons with the positively charged atomic nucleus to make an atom) hold these particles within a tiny space. This binding effect can also be depicted as a type of valley, which is also called a potential by physicists. In the world of quantum particles, it is, to a certain extent, a normal event to tunnel through the wall surrounding the potential well. An international team of researchers working with Ferenc Krausz has now caught the electrons in the act of tunnelling through the binding potential of the atom nucleus under the influence of laser light. The physicists used the new tools provided by attosecond metrology. 'For the first time, our findings confirmed in real time observation the theoretical predictions of quantum mechanics,' says Ferenc Krausz, Director at the Max Planck Institute for Quantum Optics and head of the team of scientists.

The tunnelling effect can be explained by the wave behaviour of each particle. Macroscopic objects are extremely unlikely to tunnel, which is why the phenomenon has never been observed in them. In contrast, there is a significant probability that particles from the microcosmos will tunnel through areas where, according to the rules of traditional physics, they are not even supposed to be. The tunnelling effect is considered to be responsible for processes as varied as atomic nuclei decay and the switching process in electronic components. However, since it only lasts for an extremely short time, it has not yet been observed in real time.

Krausz and his colleagues have now followed this process live with the aid of two light pulses: an intense pulse of just a few wave trains of red laser light and an attosecond pulse of extreme ultraviolet light perfectly synchronized with the red pulse. The electrical field of the laser pulses periodically exerts strong forces on the electrons. When the force is at its strongest, the light force presses the potential wall downwards. For a short moment when the wave peaks, the electron has the opportunity to penetrate the barrier and escape from the atom. This opportunity only arises when the wave peaks, that is over an extremely short interval of a fraction of a femtosecond, a trillionth of a second.

There is no instrument that can directly resolve the tunnel effect. It is only possible to show the existence of the end products, the atoms, which, following the laser pulse, disintegrate into an electron and a positively charged ion. The researchers therefore had to use the trick of experimenting with neon atoms. In these, the electrons are in a closed shell, and therefore in particularly strong bonds, and resist the attempts of the laser pulse to release them from the atom. Only electrons hit by an attosecond flash of UV manage to reach the periphery of the atom and can extricate themselves from the atom by tunnelling. Therefore, the physicists can only ionize neon atoms with a red laser pulse that they have first prepared with this flash.

'With a UV pulse lasting just 250 attoseconds, which was synchronized exactly with the red laser pulse, we moved an electron at any point in time during the laser wave with attosecond precision to the periphery,' explains Krausz. Step by step, the researchers shifted this point in time and measured the number of atoms ionized by the laser. This allowed them to reconstruct the chronology of the ionization process. As the theory predicted, the electrons left the atoms in the immediate vicinity of the most intense wave peaks, which can be seen clearly from the discrete stages of ionization coinciding exactly with the peaks in fig. 3 (the green line). The electrons remained at this stage for less than 400 attoseconds. Within such a short period, the electrons are released from the atom by the light energy.

'The experiments not only provide us with insight into the dynamics of electron tunnelling for the first time,' says Krausz. 'We have also shown that the movement of electrons in atoms or molecules can be observed in real time with the aid of laser field-induced tunnelling.' Based on this finding and the enabled control over electron movement within the atom, in the future scientists will be able to research how the boundaries of microelectronics can be shifted, or how to develop sources of compact, very bright X-rays. These will in turn allow progress to be made in the imaging of biological objects and in radiation therapy.