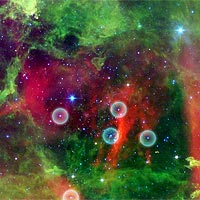 This infrared image from NASA's Spitzer Space Telescope shows the Rosette nebula, a pretty star-forming region more than 5,000 light-years away in the constellation Monoceros. In optical light, the nebula looks like a rosebud, or the 'rosette' adornments that date back to antiquity.

But lurking inside this delicate cosmic rosebud are so-called planetary 'danger zones' (see sphere illustrations). These zones surround super hot stars, called O-stars (blue stars inside spheres), which give off intense winds and radiation. Young, cooler stars that just happen to reside within one of these zones are in danger of having their dusty planet-forming materials stripped away.

While O-star danger zones were known about before, their parameters were not. Astronomers used Spitzer's infrared vision to survey the extent of the five danger zones shown here. The results showed that young stars lying beyond 1.6 light-years, or 10 trillion miles, of any O-stars are safe, while young stars within this zone are likely to have their potential planets blasted into space.

Radiation and winds from the super hot stars have collectively blown layers of dust (green) and gas away, revealing the cavity of cooler dust (red). The largest two blue stars in this picture are in the foreground, and not in the nebula itself.

This image shows infrared light captured by Spitzer's infrared array camera. Light with wavelengths of 24 microns is red; light of 8 microns is green; and light of 4.5 microns is blue.

Astronomers have laid down the cosmic equivalent of yellow 'caution' tape around super hot stars, marking the zones where cooler stars are in danger of having their developing planets blasted away.

In a new study from NASA's Spitzer Space Telescope, scientists report the first maps of so-called planetary 'danger zones.' These are areas where winds and radiation from super hot stars can strip other young, cooler stars like our sun of their planet-forming materials. The results show that cooler stars are safe as long as they lie beyond about 1.6 light-years, or nearly 10 trillion miles, of any hot stars. But cooler stars inside the zone are likely to see their potential planets boiled off into space.

'Stars move around all the time, so if one wanders into the danger zone and stays for too long, it will probably never be able to form planets,' said Zoltan Balog of the University of Arizona, Tucson, lead author of the new report, appearing May 20 in the Astrophysical Journal.

The findings are helping astronomers pinpoint the types of environments where planets beyond our solar system, including some that might be hospitable to life, are most likely to form.

Planets are born out of a flat disk of gas and dust, called a protoplanetary disk, that swirls around a young star. They are believed to clump together out of the disk over millions of years, growing in size like dust bunnies as they sweep through the dust.

Previous studies revealed that these protoplanetary disks can be destroyed by the most massive, hottest type of star in the universe, called an O-star, over a period of about a million years. Ultraviolet radiation from an O-star heats and evaporates the dust and gas in the disk, then winds from the star blow the material away. Last year, Balog and his team used Spitzer to capture a stunning picture of this 'photoevaporation' process at work (www.spitzer.caltech.edu/Media/happenings/20061003/).

The team's new study is the first systematic survey for disks in and around the danger zone, or 'blast radius' of an O-star. They used Spitzer's heat-seeking infrared eyes to look for disks around 1,000 stars in the Rosette Nebula, a turbulent star-forming region 5,200 light-years away in the constellation Monoceros. The stars range between one-tenth and five times the mass of the sun and are between 2 and 3 million years old. They are all near at least one of the region's massive O-stars.

The observations revealed that, beyond 10 trillion miles of an O-star, about 45 percent of the stars had disks - about the same amount as there were in safer neighborhoods free of O-stars. Within this distance, only 27 percent of the stars had disks, with fewer and fewer disks spotted around stars closest to the O-star. In other words, an O-star's danger zone is a sphere whose damaging effects are worst at the core. For reference, our sun's closest star, a small star called Proxima Centauri, is nearly 30 trillion miles away.

In addition, the new study indicates that a protoplanetary disk will boil off faster in the zone's perilous core. For example, a disk two times closer to an O-star than another disk will evaporate twice as fast. 'The edges of the danger zone are sharply defined,' said Balog. 'It is relatively safe for protoplanetary disks outside it, whereas a disk that gets dragged along by its star to be really close to an O-star could disappear in as fast as a hundred thousand years.'

Despite this doomsday scenario, there is a chance some planets could survive a close encounter with an O-star. According to one alternative theory of planet formation, some gas giants like Jupiter might form in less than one million years. If such a planet already existed around a young star whose disk is blown away, the gas giant would stay put while any burgeoning rocky planets like Earth would be forever swept away.

Some astronomers think our sun was born in a similarly violent neighborhood studded with O-stars before migrating to its present, more spacious home. If so, it was lucky enough to escape a harrowing ride into any danger zones, or our planets, and life as we know it, wouldn't be here today.