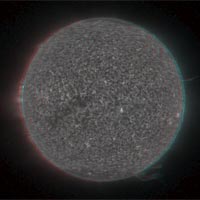 This video compilation includes the first 3-D images of the sun, taken by NASA's STEREO mission. Use 3-D glasses for best viewing.

'The improvement with STEREO's 3-D view is like going from a regular X-ray to a 3-D CAT scan in the medical field,' said Michael Kaiser, the mission's project scientist at NASA's Goddard Space Flight Center, Greenbelt, Md.

The spacecraft were launched October 25, 2006. On January 21 they completed a series of complex maneuvers, including flying by the moon, to position the spacecraft in their mission orbits. The two observatories are now orbiting the sun, one slightly ahead of Earth and one slightly behind, separating from each other by approximately 45 degrees per year. Just as the slight offset between a person's eyes provides depth perception, the separation of spacecraft allows 3-D images of the sun. The new 3-D images are generated by NASA's Jet Propulsion Laboratory, Pasadena, Calif.

Violent solar weather originates in the sun's atmosphere, or corona, and can disrupt satellites, radio communication, and power grids on Earth. The corona resembles wispy smoke plumes, which flow outward along the sun's tangled magnetic fields. It is difficult for scientists to tell which structures are in front and which are behind.

'In the solar atmosphere, there are no clues to help us judge distance. Everything appears flat in the 2-D plane of the sky. Having a stereo perspective just makes it so much easier,' said Russell Howard of the Naval Research Laboratory, Washington, the principal investigator for the Sun Earth Connection Coronal and Heliospheric Investigation suite of telescopes on the spacecraft.

'With STEREO's 3-D imagery, we'll be able to discern where matter and energy flows in the solar atmosphere much more precisely than with the 2-D views available before. This will really help us understand the complex physics going on,' said Howard.

The mission's depth perception also will help improve space weather forecasts. Of particular concern is a destructive type of solar eruption called a coronal mass ejection. These are eruptions of electrically charged gas, called plasma, from the sun's atmosphere. A coronal mass ejection cloud can contain billions of tons of plasma and move at a million miles per hour.

'In addition to the STEREO perspective of solar features, STEREO for the first time will allow imaging of the solar disturbances the entire way from the sun to the Earth. Presently, scientists are only able to model this region in the dark, from only one picture of solar disturbances leaving the sun and reaching only a fraction of the sun-Earth distance,' said Madhulika Guhathakurta, the mission's program scientist at NASA Headquarters, Washington.