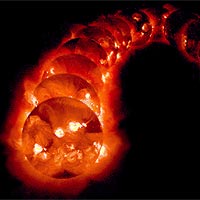 The next 11-year cycle of solar storms will most likely start next March and peak in late 2011 or mid-2012—up to a year later than expected—according to a forecast issued by the NOAA Space Environment Center in coordination with an international panel of solar experts. The NOAA Space Environment Center led the prediction panel and issued the forecast at its annual Space Weather Workshop in Boulder, Colo. NASA sponsored the panel.

Expected to start last fall, the delayed onset of Solar Cycle 24 stymied the panel and left them evenly split on whether a weak or strong period of solar storms lies ahead, but neither group predicts a record-breaker.

Solar cycle intensity is measured in maximum number of sunspots—dark blotches on the sun that mark areas of heightened magnetic activity. The more sunspots there are, the more likely it is that major solar storms will occur.

In the cycle forecast issued Wednesday, half of the panel predicts a moderately strong cycle of 140 sunspots, plus or minus 20, expected to peak in October 2011. The other half predicts a moderately weak cycle of 90 sunspots, plus or minus 10, peaking in August 2012. An average solar cycle ranges from 75 to 155 sunspots. The late decline of Cycle 23 has helped shift the panel away from its earlier leaning toward a strong Cycle 24. Now the group is evenly split between strong and weak.

The first year after solar minimum, marking the end of Cycle 23, will provide the information scientists need to arrive at a consensus. NOAA and the panel decided to issue their best estimate now and update the forecast as the cycle progresses, since NOAA Space Environment Center customers have been requesting a forecast for more than a year.

'By giving a long-term outlook, we're advancing a new field—space climate—that's still in its infancy,' said retired Air Force Brig. Gen. David L. Johnson, director of the NOAA National Weather Service. 'Issuing a cycle prediction of the onset this far in advance lies on the very edge of what we know about the sun.'

Scientists have issued cycle predictions only twice before. In 1989, a panel met to predict Cycle 22, which peaked that same year. Scientists met again in September of 1996 to predict Cycle 23—six months after the cycle had begun. Both groups did better at predicting timing than intensity, according to NOAA Space Environment Center scientist Douglas Biesecker, who chairs the current panel. He describes the group's confidence level as 'high' for its estimate of a March 2008 onset and 'moderate' overall for the two estimates of peak sunspot number and when those peaks would occur.

One disagreement among the current panel members centers on the importance of magnetic fields around the sun's poles as the previous cycle decays. End-cycle polar fields are the bedrock of the approach predicting a weak Cycle 24. The strong-cycle forecasters place more importance on other precursors extending over a several-cycle history. Another clue will be whether Cycle 24 sunspots appear by mid 2008. If not, the strong-cycle group might change its forecast.

'The panelists in each camp have clear views on why they believe in their prediction, why they might be wrong, and what it would take to change their minds,' said Biesecker. 'We're on the verge of understanding and agreeing on which precursors are most important in predicting future solar activity.'

NOAA, an agency of the U.S. Commerce Department, is celebrating 200 years of science and service to the nation. From the establishment of the Survey of the Coast in 1807 by Thomas Jefferson to the formation of the Weather Bureau and the Commission of Fish and Fisheries in the 1870s, much of America's scientific heritage is rooted in NOAA. NOAA is dedicated to enhancing economic security and national safety through the prediction and research of weather and climate-related events and information service delivery for transportation, and by providing environmental stewardship of the nation's coastal and marine resources. Through the emerging Global Earth Observation System of Systems (GEOSS), NOAA is working with its federal partners, more than 60 countries and the European Commission to develop a global monitoring network that is as integrated as the planet it observes, predicts and protects.