Scientists Discover Planetary System Similar to Our Own 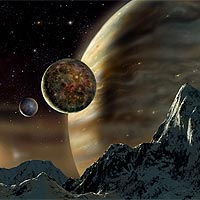 The image shows an impression by David A. Hardy of a possible scene from a moon orbiting the extra-solar planet in orbit around the star HD70642. The planet has a mass about twice that of Jupiter and orbits the star in roughly six years, with a nearly circular orbit of more than three times the Earth-Sun distance. The star HD70642 is a 7th magnitude star in the southern constellation Puppis, and has properties very similar to that of our sun. The similarity in appearance of the extra-solar planet to Jupiter arises because the planets have a similar mass. The possible existence of the moons has been inferred from our knowledge of the planets in our own solar system and from theories of planetary formation—they have not actually been detected. Photo Credit: David A. Hardy, astroart.org Copyright (c) Particle Physics and Astronomy Research Council

An international team of scientists has discovered a planet and star that may share the same relationship as Jupiter and our Sun, the closest comparison that researchers have found since they began their search for extra-solar planets nearly a decade ago.

By analyzing light spectra collected with the 3.9-meter Anglo-Australian Telescope in Siding Spring, Australia, scientists from the United States, Australia, and Britain made precision measurements of the star HD 70642.

The telescope data reveal a wobble in the star's position, an artifact from the gravitational tug of a planet roughly twice the size of Jupiter. The star is similar in size and structure to our Sun. From the wobble of HD 70642, the team has learned that the orbit of its planet is similar to the orbit of Jupiter in both shape and distance.

The planet, a gas giant, is right where it should be if the solar system evolved like ours, suggesting that other planets may be found nearby and that the system could potentially harbor life.

The researchers, supported by the National Science Foundation (NSF), conduct the Anglo-Australian Planet Search (AAPS), one of the leading extra-solar planet searches in the world.

"There's hardly anything more exciting than finding other planets," said Philip Ianna, the program director who oversees NSF support for extra-solar planet searches. For 50 years, NSF has provided U.S. and international astronomers with access to facilities for ground-based exploration of the universe, including the world's largest fully steerable radio telescope in Green Bank, W. Va.; the world's largest single-dish radio telescope at Arecibo, Puerto Rico; and the twin Gemini telescopes on Mauna Kea in Hawaii and on Cerro Pachón in Chile that together can see the entire night sky.

AAPS team member Hugh Jones of Liverpool John Moores University in the United Kingdom will announce their latest findings at the conference "Extra-solar Planets: Today and Tomorrow," in Paris, France, on July 3, 2003. The team will publish their findings in an upcoming issue of Astrophysical Journal Letters under lead author Brad Carter of the University of Southern Queensland, Australia.

NSF has supported the hunt for extra-solar planets since the beginning of search efforts, including the research of AAPS team members Paul Butler of the Carnegie Institution of Washington and Geoffrey Marcy of the University of California at Berkeley.

In 1995, Marcy and Butler confirmed the discovery of the first known extra-solar planet, and in 1996 the researchers became the first Americans to discover a new planetary system.

Marcy and Butler spent eight years developing a technique sensitive enough to detect the tiny gravitational tug that a planet imposes on its host star. By inserting a glass cell filled with iodine between the incoming starlight and their measuring tools, the researchers establish a reference set of spectral lines against which the team can track a wobbling star's changing light waves.

"During the long struggle to develop the iodine technique, it was not clear that we were going to succeed," said Marcy. "It was NSF's steady, visionary support that made our success possible."

Before the first extra-solar planets were discovered, researchers assumed that other solar systems would be like ours. However, while researchers have discovered more than 70 gas giants orbiting distant stars, only a handful of the gaseous planets follow nearly circular orbits like in our solar system—most have elliptical orbits. In addition, many of the extra-solar planets orbit either too close or too far from their host star for the planetary system to be similar to our own. Of the few planetary systems that appear to look like ours, this latest discovery is the closest match.

"The NSF-sponsored Anglo-Australian Planet Search is the only southern hemisphere planet search capable of detecting solar system analogs with large planets similar to our own Jupiter and Saturn," said team member Chris McCarthy of the Carnegie Institution of Washington. "The discovery of planets orbiting other stars allows us to put our own Earth and solar system in a bigger context, a galactic context, for the first time."

The researchers continue their hunt for stars by studying the changes in an object's spectrum, its lightwave "fingerprint," as the celestial body wobbles.

The technique that Marcy and Butler have perfected, called Doppler velocity measurement, is based on the motion of the star and planet around a center of gravity. The star and any orbiting bodies are latched to each other by their mutual gravitational pull, with the center of gravity lying closer to, but not within, the star.

"You can think of the star and the large planet as dance partners, spinning around while clasping their outstretched hands," said Ianna. "The smaller partner on the outside is moving greater distances in a larger circle," he added, "while the larger inside partner only moves his or her feet in a very small circle—the movement around the very small inner circle is the 'wobble' that we see in these stars."

As the star moves toward us in its wobble, the lightwaves coming off of it are compressed and appear more blue, while the opposite occurs as the star swings around and moves away from us, stretching the light and shifting the light color towards the redder regions of the spectrum.

The research team has refined the technique to a fine point, measuring changes in the star's velocity equivalent to a brisk human walk—3 meters per second—in stars tens and hundreds of light-years distant.

"We are working to place all 2,000 of the nearest Sun-like stars under survey, all the Sun-like stars out to 150 light-years," said Butler. "Our goal is two-fold," he added, "to provide a first reconnaissance—a first census—of our nearest neighbors in space, and to provide the first data to address the fundamental question, how common or how rare is our own Solar System?"

In addition to the National Science Foundation, the research is supported by the U.K. Particle Physics and Astronomy Research Council and the Australian government.