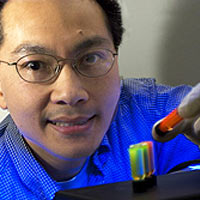 Research by Michael Wong and scientists at Rice's Center for Biological and Environmental Nanotechnology revealed a breakthrough method for producing molecular specks of semiconductors called quantum dots, a discovery that could clear the way for better, cheaper solar energy panels.

Rice University scientists have revealed a breakthrough method for producing molecular specks of semiconductors called quantum dots, a discovery that could clear the way for better, cheaper solar energy panels.

The research, by scientists at Rice's Center for Biological and Environmental Nanotechnology (CBEN), appeared online May 1 in the journal Small. It describes a new chemical method for making four-legged cadmium selenide quantum dots, which previous research has shown to be particularly effective at converting sunlight into electrical energy.

Quantum dots are 'megamolecules' of semiconducting materials that are smaller than living cells. They interact with light in unique ways, to give off different-colored light or to create electrons and holes, due partly to their tiny size, partly to their shape and partly to the material they're made of. Scientists have studied quantum dots for more than a decade, with an eye toward using them in medical tests, chemical sensors and other devices.

One way towards cheaper solar cells is to make them out of quantum dots. Prior research by others has shown that four-legged quantum dots, which are called tetrapods, are many times more efficient at converting sunlight into electricity than regular quantum dots. But, Wong said the problem is that there is still no good way of producing tetrapods. Current methods lead to a lot of particles with uneven-length arms, crooked arms, and even missing arms. Even in the best recipe, 30 percent of the prepared particles are not tetrapods, he said.

CBEN's formula, which was developed by Wong and his graduate student Subashini Asokan with CBEN Director Vicki Colvin and graduate student Karl Krueger, produces same-sized particles, in which more than 90 percent are tetrapods. Significantly, these tetrapods are made of cadmium selenide, which have been very difficult to make, until now. The essence of the new recipe is to use cetyltrimethylammonium bromide instead of the standard alkylphosphonic acid compounds. Cetyltrimethylammonium bromide happens to be safer – it's used in some shampoos, for example – and it's much cheaper than alkylphosphonic acids. For producers looking to eventually ramp up tetrapod production, this means cheaper raw materials and less purification steps, Wong said.

'One of the major bottlenecks in developing tetrapod-based solar cell devices has been removed, namely the unavailability of high-quality tetrapods of the cadmium selenide kind,' Wong said. 'We might be able to make high-quality nanoshapes of other compositions also, using this new synthesis chemistry.'