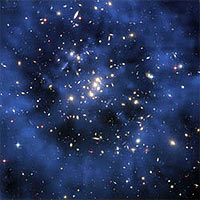 This Hubble Space Telescope composite image shows a ghostly 'ring' of dark matter in the galaxy cluster Cl 0024+17. The ring-like structure is evident in the blue map of the cluster's dark matter distribution. The map is superimposed on a Hubble image of the cluster. The ring is one of the strongest pieces of evidence to date for the existence of dark matter, an unknown substance that pervades the universe.

The most common substance in the universe is called dark matter. It doesn’t shine or reflect light. We can’t even see it.

It is an invisible substance composed of atoms that are far different from those that make up the universe’s normal matter, such as stars and galaxies.

In fact, if you drove into a wall made of dark matter, you wouldn’t crack a headlight or inflate an airbag. You wouldn’t even know it happened. But what happens to dark matter during a collision?

Astronomers using NASA’s Hubble Space Telescope got a first-hand view of how dark matter behaves during a titanic collision between two galaxy clusters. The wreck created a ripple of dark matter, which is somewhat similar to a ripple formed in a pond when a rock hits the water.

The ring's discovery is among the strongest evidence yet that dark matter exists. Astronomers have long suspected the existence of the invisible substance as the source of additional gravity that holds together galaxy clusters. Such clusters would fly apart if they relied only on the gravity from their visible stars. Although astronomers don't know what dark matter is made of, they hypothesize that it is a type of elementary particle that pervades the universe.

The Hubble astronomers say it is the first time they have detected dark matter as having a unique structure that is different from the gas and galaxies in the cluster. The researchers spotted the ring unexpectedly while they were mapping the distribution of dark matter within the galaxy cluster Cl 0024+17 (ZwCl 0024+1652), located 5 billion light-years from Earth. The ring measures 2.6 million light-years across.

Although astronomers cannot see dark matter, they can infer its existence in galaxy clusters by observing how its gravity bends the light of more distant background galaxies, a powerful effect called gravitational lensing. The blue streaks near the center of another Hubble image of the cluster are the distorted shapes of more distant galaxies, whose light was bent and magnified by the powerful gravity of Cl 0024+17.

The collision between the two galaxy clusters, the astronomers explained, created a ripple of dark matter that left distinct footprints in the shapes of the background galaxies. It's like looking at the pebbles on the bottom of a pond with ripples on the surface. The pebbles' shapes appear to change as the ripples pass over them. So, too, the background galaxies behind the ring show coherent changes in their shapes due to the presence of the dense ring. Although the invisible matter has been found before in other galaxy clusters, astronomers say it has never been detected to be so largely separated from the hot gas and the galaxies that make up galaxy clusters.

The astronomers found previous research that suggested the cluster had collided with another cluster 1 to 2 billion years ago. They then created computer simulations of galaxy cluster collisions. The simulations show that when the two clusters smash together, the dark matter falls to the center of the combined cluster and sloshes back out. As the dark matter moves outward, it begins to slow down under the pull of gravity and pile up, like cars bunched up on a freeway.