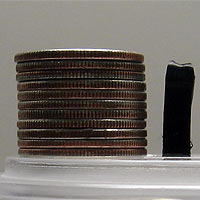 Researchers at the University of Cincinnati have grown the world's longest carbon nanotube arrays, long enough to be seen by the naked eye.

Using techniques that could revolutionize manufacturing for certain materials, researchers have grown carbon nanotubes that are the longest in the world. While still slightly less than 2 centimeters long, each nanotube is 900,000 times longer than its diameter.

The fibers--which have the potential to be longer, stronger and better conductors of electricity than copper and many other materials--could ultimately find use in smart fabrics, sensors and a host of other applications.

To grow the aligned bundles of tiny tubes, the researchers combined advantages of chemical vapor deposition (CVD), a technique for creating thin coatings that is especially common in the semiconductor industry, with a novel substrate and catalyst onto which the carbon attaches.

Supported by the National Science Foundation (NSF) and the Office of Naval Research, University of Cincinnati (UC) professors Vesselin Shanov and Mark Schulz collaborated with post-doctoral researcher Yun Yeo Heung and students to develop the technique.

The researchers partnered with First Nano, a division of CVD Equipment Corp. of Ronkonkoma, N.Y., to use their laboratory and a specialized furnace called the EasyTube 3000. With the equipment, the researchers were able to break apart hydrocarbons to create a vapor of carbon-atom starting material. Within the vapor sat the new substrate--a catalyst made of alternating metal and ceramic layers atop an oxidized-silicon wafer base--which served as the foundation for growth.

'This process is revolutionary because it allows us to keep the catalyst 'alive' for a long period of time thus, providing fast and continuous transport of the carbon 'building blocks' to the carbon nanotube growth zone,' said Shanov.

The carbon nanotubes are extremely long compared to predecessors--the longest is 3 millimeters beyond the prior world record. More important for manufacturing, the research team grew a 12-millimeters-thick, uniform carpet of aligned carbon nanotubes on a roughly 10-centimeter silicon substrate, opening the door for scaling-up the process.

The inventions were presented in April 2007 at the Single Wall Carbon Nanotube Nucleation and Growth Mechanisms workshop organized by NASA and Rice University. The research was supported by NSF grant 0510823, in addition to support from the Office of Naval Research through North Carolina A&T SU.