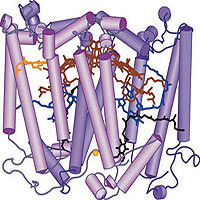 During the remarkable cascade of events of photosynthesis, plants approach the pinnacle of stinginess by scavenging nearly every photon of available light energy to produce food. Yet after many years of careful research into its exact mechanisms, some key questions remain about this fundamental biological process that supports all life on Earth.

Now, a large research team led by Neal Woodbury, a scientist at ASU's Biodesign Institute, has come up with a new insight into the mechanism of photosynthesis, which involves the orchestrated movement of proteins on the timescale of a millionth of a millionth of a second. Their findings are described in “Protein Dynamics Control the Kinetics of Initial Electron Transfer in Photosynthesis,” in the May 4 issue of Science .

“The studies that led up to this work initiated 20 years ago when Jim Allen and I looked at one of our mutants and thought our spectrometer was broken,” Woodbury says. “That mutant turned out to be the first of a long series of mutations that systematically altered the energy of the initial reaction.”

Since then, Woodbury and colleagues have managed to shed light on an amazing process that provides Earth's primary power source.

The textbook picture of photosynthesis represents the reaction center proteins as a scaffold, holding chlorophyll molecules at a highly optimized distance and orientation so that electrons can hop from one chlorophyll to another. With the chlorophylls in just the right position, any systematic protein movement was thought to be merely a side product of electrons shuttling between chlorophyll molecules.

Woodbury and his colleagues tried to uncover more of the physical mechanism driving photosynthesis by creating mutants that would theoretically “tweak” the electron transfer relationships between molecules in the reaction center.

“After years of failure trying to break the system by changing the energetics, we were left with the nagging question of how it continued to work so well,” says Woodbury, a professor of chemistry and biochemistry and director of Biodesign's Center for Bio-Optical Nanotechnology.

The researchers started to inch closer to an answer when Wang, a postdoctoral research associate in Woodbury's lab, noticed something in common with all of the different mutants. When using a new model based on reaction-diffusion kinetics, Wang saw that the curves representing how fast electrons moved in the reaction center had a similar shape.

“He decided that there must be some sort of underlying physical principle involved,” Woodbury says.

Not many research groups are equipped to measure the early events in photosynthesis because of the extremely short timescale, which is similar to the amount of time it takes a supercomputer to carry out a single flop. Wang was able to use the ultrafast laser facility (funded by the National Science Foundation), which acts like a high-speed motion picture camera that can capture data from these lightning-fast reactions.

“He tried a really hard experiment, and he was actually able to measure the protein motion and match it to electron transfer,” Woodbury says.

This discovery helped the researchers understand why changing the energetics didn't knock out photosynthesis.

The movement of the reaction center proteins during photosynthesis allows the plant or bacteria to harness light energy efficiently, even if conditions aren't optimal. So, while Woodbury and colleagues made it difficult for photosynthesis to work, the proteins were able to compensate by moving and energetically guiding the electrons through their biological circuit.

According to Woodbury, the reaction center proteins work for electrons in a way similar to how a slow-moving elevator with no doors would work for people. The electrons are able to get off at the spot that they need to because the protein motion adjusts the energetics until it is just right. Even if the elevator starts a little too high or low (initial energies are not optimal), the people (electrons) can still get off on the right floor.

This way of representing the electron transfer process captured the contribution of the protein movements to the rate of the reaction. The scientists then were able to quantitatively model the effect of the mutations on the initial rate of photosynthetic electron transfer and answer questions that had been haunting them for 20 years.

The answers may be good news for the development of organic solar cells, which have been of commercial interest because of their relatively low cost compared to traditional silicon solar cells.

“Some of the problems that you have with the organic photovoltaics arise from the fact that they don't work under all of the conditions you want them to,” Woodbury says.

The robustness of the natural system may offer some useful lessons for engineers trying to improve on current technologies. Woodbury proposed that there might be a way to increase the flexibility of the system used in organic solar cells by incorporating solvents that move on a variety of time scales that could “tune” the molecules to work in a wider variety of conditions.

Woodbury also expects that this new research will help move the study of photosynthesis forward.

“It's changed the way I look at how photosynthesis works and has opened up a whole set of new questions,” he says.