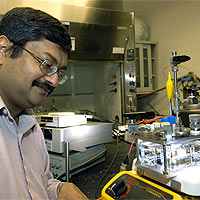 Pratim Biswas and his group have developed a method to make a variety of oxide semiconductors that, when put into water promote chemical reactions that split water into hydrogen and oxygen. The method provides a new low cost and efficient option for hydrogen production.

Engineers at Washington University in St. Louis have developed a unique photocatalytic cell that splits water to produce hydrogen and oxygen in water using sunlight and the power of a nanostructured catalyst.

The group is developing novel methodologies for synthesis of nanostructured films with superior opto-electronic properties. One of the methods, which sandwiches three semiconductor films into a compact structure on the nanoscale range, is smaller, more efficient and more stable than present photocatalytic methods, which require multiple steps and can take from several hours to a day to complete.

The discovery provides a new, low-cost and efficient option for hydrogen production and can be used for a variety of distributed energy applications.

Pratim Biswas, Ph.D., the Stifel and Quinette Jens Professor and Chair of the Department of Energy, Environmental and Chemical Engineering, and his graduate student Elijah Thimsen, recently have developed the well-controlled, gas phase process, and have demonstrated it for synthesizing a variety of oxide semiconductors such as iron and titanium dioxide films in a single step process. It is based on a simple, inexpensive flame aerosol reactor (FLAR) and consists of four mass flow controllers to regulate process gases, a standard bubbler to deliver a precursor, a metal tube that acts as a burner and a water-cooled substrate holder.

'We put these films in water and they promote some reactions that split water into hydrogen and oxygen,' said Biswas. 'We can use any oxide materials such as titanium dioxide, tungsten oxide and iron oxide in nanostructures sandwiched together that make very compact structures. The process is direct and takes only a few minutes to fabricate. More important, these processes can be scaled up to produce larger structures in a very cost effective manner in atmospheric pressure processes.'

Collaborations have now been established with Dewey Holten, Ph.D., Washington University professor of chemistry in Arts & Sciences, to better understand the electron-hole pair kinetics, information that can then be used to tune the synthesis process. Other collaborations with Robert Blankenship, Ph.D., Washington University professor of biology and chemistry in Arts & Sciences, are being explored to create hybrid bio-nanostructures that will improve the light absorption efficiencies over a broader range of wavelengths. Electrospray and other aerosol techniques are being used to create these hybrid films.

The method was described in a recent issue of SPIE, a publication of the International Society for Optical Engineering.

The research is among the first wave of news out of the new Washington University Department of Energy, Environmental and Chemical Engineering, which performs research on energy and environment, including alternative fuels and energy sources, air quality research, nanoparticle technology and particle emission control, among other topics.

Some of the department faculty — 14 members now, expected to double in five to ten years — are active in the University's ambitious BioEnergy Initiative, which is focused on the development of technologies for the production of next generation biofuels. The adoption of a systems approach will not only enable development processes for large volume production of liquid fuels from plant-based sources, but also at a low cost, and most importantly, in an environmentally benign manner — not only during the production, but also during the actual usage.

News Story Origin and Copyright: Wustl
Click here for the original news release.
'On the mountains of truth you can never climb in vain: either you will reach a point higher up today, or you will be training your powers so that you will be able to climb higher tomorrow.'