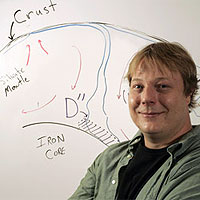 Laboratory measurements of a high-pressure mineral believed to exist deep within the Earth show that the mineral may not, as geophysicists hoped, have the right properties to explain a mysterious layer lying just above the planet's core.

A team of scientists, led by Sébastien Merkel of the University of California-Berkeley, now at CNRS/the University of Science of Technology of Lille, France, made the first laboratory study of the deformation properties of a high-pressure silicate mineral named post-perovskite. The work appears in the June 22 issue of the scientific journal Science.

The team included Allen McNamara of ASU's School of Earth and Space Exploration, part of the College of Liberal Arts and Sciences. McNamara, a geophysicist, modeled the stresses the mineral typically would undergo as convection currents deep in Earth's mantle cause it to rise and sink. Also on the team were Atsushi Kubo and Thomas Duffy, Princeton University ; Sergio Speziale, Lowell Miyagi and Hans-Rudolf Wenk, University of California-Berkeley; and Yue Meng, HPCAT, Carnegie Institution of Washington, Argonne , Ill.

“This the first time the deformation properties of this mineral have been studied at lower mantle temperatures and pressures,” McNamara says. “The goal was to observe where the weak planes are in its crystal structure and how they are oriented.”

The results of the combined laboratory tests and computer models, he says, show that post-perovskite doesn't fit what is known about conditions in the lowermost mantle.

Earth's mantle is a layer that extends from the bottom of the crust, about 25 miles down, to the planet's core, 1,800 miles deep. Scientists divide the mantle into two layers separated by a wide transition zone centered around a depth of about 300 miles. The lower mantle lies below that zone.

Known to earth scientists as D' (dee-double-prime), this layer averages 120 miles thick and lies directly above Earth's core. D' was named in 1949 by seismologist Keith Bullen, who found the layer from the way earthquake waves travel through the planet's interior. But the nature of D' has eluded scientists since Bullen's discovery.

“Our team found that while post-perovskite has some properties that fit what's known about D', our laboratory measurements and computer models show that post-perovskite doesn't fit one particular essential property,” McNamara says.

That property is seismic anisotropy, he says, referring to the fact that earthquake waves passing through D' become distorted in a characteristic way.

“Down in the D' layer, the horizontal part of earthquake waves travel faster than the vertical parts,” McNamara says. “But in our laboratory measurements and models, post-perovskite produces an opposite effect on the waves. This appears to be a basic contradiction.”

McNamara notes that the laboratory measurements, made by team members at Princeton University and at Berkeley, were extremely difficult. They involved crushing tiny samples of perovskite on a diamond anvil until they changed into post-perovskite. The scientists then shot X-rays through the samples to identify the mineral crystals' internal structure.

This information was used by other team members at the University of California-Berkeley to model how these crystals would deform as the mantle flows. The deformation results let the scientists predict how the crystals would affect seismic waves passing through them.

McNamara's work modeled the slow churn of the mantle, in which convection currents in the rock rise and fall about as fast as fingernails grow – roughly an inch a year. He calculated stresses, pressures and temperatures to draw a detailed picture of where post-perovskite would be found. This let him profile the structure of the D' layer.

“All these computations have been in two dimensions,” he says. “Our next step is to go to three-dimensional modeling.”

So does their work rule out post-perovskite to explain the D' layer?

“Not completely,” McNamara says. “We've begun to study this newly found mineral in the laboratory, but the work isn't yet over. It's possible that post-perovskite does exist in the lowermost mantle, and another mineral is causing the seismic anisotropy we see there.”