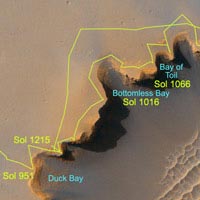 The route followed by NASA's Mars Exploration Rover Opportunity during its exploration partway around the rim of Victoria Crater is marked on this map. The rover first reached the edge of the crater on it's 951st Martian day, or sol (Sept. 26, 2006). This map shows travels through sol 1,215 (June 24, 2007). The underlying image is from the High Resolution Imaging Science Experiment camera on NASA's Mars Reconnaissance Orbiter.

NASA's Mars rover Opportunity is scheduled to begin a descent down a rock-paved slope into the Red Planet's massive Victoria Crater. This latest trek carries real risk for the long-lived robotic explorer, but NASA and the Mars Rover science team expect it to provide valuable science.

Opportunity already has been exploring layered rocks in cliffs around Victoria Crater. The team has planned the descent carefully to enable an eventual exit, but Opportunity could become trapped inside the crater or lose some capabilities. The rover has operated more than 12 times longer than its originally intended 90 days.

The scientific allure is the chance to examine and investigate the compositions and textures of exposed materials in the crater's depths for clues about ancient, wet environments. As the rover travels farther down the slope, it will be able to examine increasingly older rocks in the exposed walls of the crater.

'While we take seriously the uncertainty about whether Opportunity will climb back out, the potential value of investigations that appear possible inside the crater convinced me to authorize the team to move forward into Victoria Crater,' said Alan Stern, NASA associate administrator, Science Mission Directorate, NASA Headquarters, Washington. 'It is a calculated risk worth taking, particularly because this mission has far exceeded its original goals.'

The robotic geologist will enter Victoria Crater through an alcove named Duck Bay. The eroding crater has a scalloped rim of cliff-like promontories, or capes, alternating with more gently sloped alcoves, or bays.

A meteor impact millions of years ago excavated Victoria, which lies approximately 4 miles (6 kilometers) south of where Opportunity landed in January 2004. The impact-created bowl is half a mile (800 meters) across and about five times as wide as Endurance Crater, where Opportunity spent more than six months exploring in 2004.

The rover began the journey to Victoria from Endurance 30 months ago. It reached the rim at Duck Bay nine months ago. Opportunity then drove approximately a quarter of the way clockwise around the rim, examining rock layers visible in the promontories and possible entry routes in the alcoves. Now, the rover has returned to the most favorable entry point.

If all of its six wheels continue working, engineers expect Opportunity to be able to climb back out of the crater. However, Opportunity's twin rover, Spirit, lost the use of one wheel more than a year ago, diminishing its climbing ability.

'These rovers are well past their design lifetimes, and another wheel could fail on either rover at any time,' Callas said. 'If Opportunity were to lose the use of a wheel inside Victoria Crater, it would make it very difficult, perhaps impossible, to climb back out.'

'We don't want this to be a one-way trip,' said Steve Squyres, principal investigator for the rovers' science instruments, Cornell University, Ithaca, N.Y. 'We still have some excellent science targets out on the plains that we would like to visit after Victoria. But if Opportunity becomes trapped there, it will be worth the knowledge gained.'