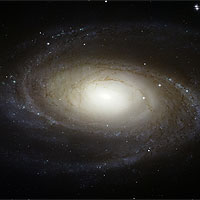 This new image of the nearby spiral galaxy Messier 81, taken by NASA's Hubble Space Telescope, shows stunning detail in a galaxy that resembles the Milky Way in many ways. This color composite was assembled from images taken in blue, visible, and infrared light. Credit: NASA, ESA, and the Hubble Heritage Team (STScI/AURA)

Astronomers unveiled the sharpest photograph ever taken of the nearby spiral galaxy Messier 81. The image from NASA's Hubble Space Telescope shows stunning detail in a galaxy that resembles the Milky Way in many ways.

'The amazing detail in this image took our breath away,' said astronomer Andreas Zezas of the Harvard-Smithsonian Center for Astrophysics (CfA). 'We can see individual stars like tiny grains of sand.'

Zezas presented the new photograph at a press conference at the 210th meeting of the American Astronomical Society.

Eighty years ago, astronomer Edwin Hubble was the first to resolve stars in the Andromeda galaxy, proving that it was a distinct galaxy separate from the Milky Way. Now, the space telescope named for Hubble has repeated his achievement with a galaxy more than five times farther away.

M81 is one of the brightest galaxies that can be seen from Earth. It is high in the northern sky in the circumpolar constellation Ursa Major, the Great Bear. At an apparent magnitude of 6.8, it is easily visible in binoculars or a small telescope. The galaxy's angular size on the sky is about the same as that of the Full Moon. Photographing such a large area required the equivalent of 2.5 days of HST time.

This beautiful galaxy is tilted at an oblique angle to our line of sight, giving a 'bird's-eye view' of the spiral structure. The galaxy is similar to our Milky Way, but our favorable view provides a better picture of the typical architecture of spiral galaxies. Though the galaxy is 11.6 million light-years away, The Hubble Space Telescope's view is so sharp that it can resolve individual stars, along with open star clusters, globular star clusters, and even glowing regions of fluorescent gas.

'The view we have of M81 is similar to what an astronomer in Andromeda would see if they looked at the Milky Way,' explained Zezas.

The spiral arms, which wind all the way down into the nucleus, are made up of young, bluish, hot stars formed in the past few million years. They also host a population of stars formed in an episode of star formation that started about 600 million years ago. The greenish regions are dense areas of bright star formation. The ultraviolet light from hot young stars are fluorescing the surrounding clouds of hydrogen gas. A number of sinuous dust lanes also wind all the way into the nucleus of M81.

'The presence of dust lanes shows that star formation is happening all the way down to the nucleus,' said Zezas.

M81 may be undergoing a surge of star formation along the spiral arms due to a close encounter it may have had with its nearby spiral galaxy NGC 3077 and a nearby starburst galaxy (M82) about 300 million years ago. Astronomers plan to use the Hubble image to study the star formation history of the galaxy and how this history relates to the neutron stars and black holes seen in X-ray observations of M81 with NASA's Chandra X-ray Observatory.

This project is part of a larger, in-depth investigation of M81 using the Spitzer Space Telescope and the Galaxy Evolution Explorer (GALEX) in addition to Hubble.

'It's absolutely amazing to be able to study star formation in this galaxy with three superb space telescopes in ways we could never achieve from the ground,' said John Huchra (CfA), who also is working on the M81 project.

The Hubble data was taken with the Advanced Camera for Surveys in 2004 through 2006. This color composite was assembled from images taken in blue, visible, and infrared light.