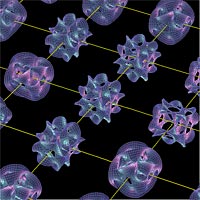 String Theory predicts the existence of more than the 3 space dimensions and 1 time dimension we are all familiar with. According to string theory, there are additional dimensions that we are unfamiliar with because they are curled up into tiny complicated shapes that can only be seen on tiny scales. If we could shrink to this tiny, Planck-sized scale we could see that at every 3D point in space, we can also explore 6 additional dimensions. This animation shows an array of Calabi-Yau spaces which are projections of these higher dimensions into the more familiar dimensions we are aware of.

String theory has come under fire in recent years. Promises have been made that have not been lived up to. Leiden theoretical physicists have now for the first time used string theory to describe a physical phenomenon. Their discovery has been reported this week in 'Science'.

‘This is superb. I have never experienced such euphoria.' Jan Zaanen makes no attempt to hide his enthusiasm. Together with Mihailo Cubrovic and Koenraad Schalm, he has successfully managed to shed light on a previously unexplained natural phenomeon using the mathematics of string theory.

This is the first time that a calculation based on string theory has been published in Science, even though the theory is widely known. 'There have always been a lot of expectations surrounding string theory,' Zaanen explains, having himself studied the theory to satisfy his own curiosity. 'String theory is often seen as a child of Einstein that aims to devise a revolutionary and comprehensive theory, a kind of 'theory of everything'. Ten years ago, researchers even said: 'Give us two weeks and we'll be able to tell you where the big bang came from. The problem of string theory was that, in spite of its excellent maths, it was never able to make a concrete link with the physical reality - the world around us.'

But now, Zaanen, together with his colleagues Cubrovic and Schalm, are trying to change this situation, by applying string theory to a phenomenon that physicists, including Zaanen, have for the past fifteen years been unable to explain: the quantum-critical state of electrons. This special state occurs in a material just before it becomes super-conductive at high temperature. Zaanen describes the quantum-critical state as a 'quantum soup', whereby the electrons form a collective independent of distances, where the electrons exhibit the same behaviour at small quantum mechanical scale or at macroscopic human scale.

Because of Zaanen's interest in string theory, he and string theoreticist Koenraad Schalm soon became acquainted after Schalm's arrival in Leiden. Zaanen had an unsolved problem and Schalm was an expert in the field of string theory. Their common interest brought them together, and they decided to work jointly on the research. They used the aspect of string theory known as AdS/CFT correspondence. This allows situations in a large relativistic world to be translated into a description at minuscule quantum physics level. This correspondence bridges the gap between these two different worlds. By applying the correspondence to the situation where a black hole vibrates when an electron falls into it, they arrived at the description of electrons that move in and out of a quantum-critical state.

After days and nights of hard grind, it was a puzzle that fitted. 'We hadn't expected it to work so well,' says a delighted Zaanen. 'The maths was a perfect fit; it was superb. When we saw the calculations, at first we could hardly believe it, but it was right.'

Although the mystery of high temperature super-conductivity isn't fully resolved, the findings do show that major problems in physics can be addressed using string theory. And this is just the start, Zaanen believes. ‘AdS/CFT correspondence now explains things that colleagues who have been beavering away for ages were unable to resolve, in spite of their enormous efforts. There are a lot of things that can be done with it. We don't fully understand it yet, but I see it as a gateway to much more.' The fact that Science was keen to publish this discovery early confirms this.