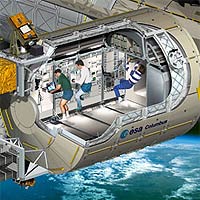 An artist's impression of Columbus, a cutaway view, the European laboratory module of the International Space Station.

More than 500 years ago, the voyages of Christopher Columbus to the New World and the discoveries he made caused quite a stir throughout Europe. Today, excitement is building on both sides of the Atlantic as the long-awaited launch of ESA’s Columbus space laboratory grows closer, as NASA starts processing Shuttle Atlantis in preparation for the mission.

Columbus was flown to Florida on 30 May 2006. Earlier this year, it was removed from temporary storage, and the 12.8 tonne International Space Station (ISS) module is now fully outfitted with its experiment racks and orbital hardware.

At the moment, engineers are installing the trunnions that will secure the 4.5 metre diameter aluminium cylinder in the Shuttle payload bay. The next step is to mount the panels that will protect the lab from potentially damaging micrometeorite impacts.

After a summer break, the Columbus hatch will be reopened at the beginning of October, when it will undergo final preparations for flight, including leak checks on the water cooling system, a pressurisation check and the switching on of electrical systems. Once the seals are in position on the module’s docking mechanism, it will be placed inside a canister for transport to the launch pad.

'The launch of Columbus will be a major landmark in European space exploration,' said Bernardo Patti, Columbus Project Manager. 'Columbus was originally scheduled for launch in 2002, but delays in the construction of the ISS and the tragic loss of Shuttle Columbia have put back the mission five years.

'Once Columbus is operational, we will have a permanent presence on the Station. We will own our own real estate. By providing the Automated Transfer Vehicle and Columbus, ESA will be able to meet its scientific objectives as a full partner, sharing resources with other ISS participants rather than simply purchasing them.'

Columbus will not be the only representative of ESA on the STS-122 Shuttle flight. The crew of seven will include ESA astronauts Hans Schlegel and Léopold Eyharts. Schlegel will play a key role in two spacewalks during which he will help to install and power up Columbus and then position two scientific payloads on the module’s exterior. While Léopold Eyharts will perform a large part of the activation and initial commissioning activities.

After the Shuttle heads for home, Eyharts and the other members of the resident ISS crew will complete the commissioning of the laboratory and conduct its first scientific experiments.