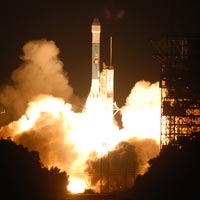 NASA's Phoenix Mars Mission blasted off Saturday, aiming for a May 25, 2008, arrival at the Red Planet and a close-up examination of the surface of the northern polar region.

Perched atop a Delta II rocket, the spacecraft left Cape Canaveral Air Force Base at 5:26 a.m. Eastern Time into the predawn sky above Florida's Atlantic coast.

"Today's launch is the first step in the long journey to the surface of Mars. We certainly are excited about launching, but we still are concerned about our actual landing, the most difficult step of this mission," said Phoenix Principal Investigator Peter Smith of the University of Arizona's Lunar and Planetary Laboratory, Tucson.

The spacecraft established communications with its ground team via the Goldstone, Calif., antenna station of NASA's Deep Space Network at 7:02 a.m. Eastern Time, after separating from the third stage of the launch vehicle.

"The launch team did a spectacular job getting us on the way," said Barry Goldstein, Phoenix project manager at NASA's Jet Propulsion Laboratory, Pasadena, Calif. "Our trajectory is still being evaluated in detail; however we are well within expected limits for a successful journey to the red planet. We are all thrilled!"

Phoenix will be the first mission to touch water-ice on Mars. Its robotic arm will dig to an icy layer believed to lie just beneath the surface. The mission will study the history of the water in the ice, monitor weather of the polar region, and investigate whether the subsurface environment in the far-northern plains of Mars has ever been favorable for sustaining microbial life.

"Water is central to every type of study we will conduct on Mars," Smith said.

The Phoenix Mars Mission is the first of NASA's competitively proposed and selected Mars Scout missions, supplementing the agency's core Mars Exploration Program, whose theme is "follow the water." The University of Arizona was selected to lead the mission in August 2003 and is the first public university to lead a Mars exploration mission.

Phoenix uses the main body of a lander originally made for a 2001 mission that was cancelled before launch. "During the past year we have run Phoenix through a rigorous testing regimen," said Ed Sedivy, Phoenix spacecraft program manager for Lockheed Martin Space Systems, Denver, which built the spacecraft. "The testing approach runs the spacecraft and integrated instruments through actual mission sequences, allowing us to asses the entire system through the life of the mission while here on Earth."

Samples of soil and ice collected by the lander's robotic arm will be analyzed by instruments mounted on the deck. One key instrument will check for water and carbon-containing compounds by heating soil samples in tiny ovens and examining the vapors that are given off. Another will test soil samples by adding water and analyzing the dissolution products. Cameras and microscopes will provide information on scales spanning 10 powers of 10, from features that could fit by the hundreds into a period at the end of a sentence to an aerial view taken during descent. A weather station will provide information about atmospheric processes in the arctic region.

The Phoenix mission is led by Smith, with project management at JPL and development partnership at Lockheed Martin, Denver. The NASA Launch Services Program at Kennedy Space Center and the United Launch Alliance are responsible for the Delta II launch service. International contributions are provided by the Canadian Space Agency, the University of Neuchatel (Switzerland), the University of Copenhagen (Denmark), the Max Planck Institute (Germany) and the Finnish Meteorological Institute. JPL is a division of the California Institute of Technology in Pasadena.