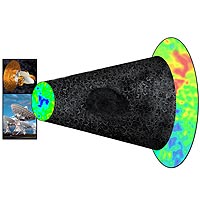 Illustration of the effect of intervening matter in the cosmos on the cosmic microwave background (CMB). On the right, the CMB is released shortly after the Big Bang, with tiny ripples in temperature due to fluctuations in the early Universe. As this radiation traverses the Universe, filled with a web of galaxies, clusters, superclusters and voids, it experiences slight perturbations. In the direction of the giant newly-discovered void, the WMAP satellite (top left) sees a cold spot, while the VLA (bottom left) sees fewer radio galaxies.

University of Minnesota astronomers have found an enormous hole in the Universe, nearly a billion light-years across, empty of both normal matter such as stars, galaxies and gas, as well as the mysterious, unseen 'dark matter.' While earlier studies have shown holes, or voids, in the large-scale structure of the Universe, this new discovery dwarfs them all.

'Not only has no one ever found a void this big, but we never even expected to find one this size,' said Lawrence Rudnick of the University of Minnesota astronomy professor. Rudnick, along with grad student Shea Brown and associate professor Liliya Williams, also of the University of Minnesota, reported their findings in a paper accepted for publication in the Astrophysical Journal.

Astronomers have known for years that, on large scales, the Universe has voids largely empty of matter. However, most of these voids are much smaller than the one found by Rudnick and his colleagues. In addition, the number of discovered voids decreases as the size increases.

'What we've found is not normal, based on either observational studies or on computer simulations of the large-scale evolution of the Universe,' Williams said.

The astronomers drew their conclusion by studying data from the NRAO VLA Sky Survey (NVSS), a project that imaged the entire sky visible to the Very Large Array (VLA) radio telescope, part of the National Science Foundation's National Radio Astronomy Observatory (NRAO). Their study of the NVSS data showed a remarkable drop in the number of galaxies in a region of sky in the constellation Eridanus, southwest of Orion.

'We already knew there was something different about this spot in the sky,' Rudnick said. The region had been dubbed the 'WMAP Cold Spot,' because it stood out in a map of the Cosmic Microwave Background (CMB) radiation made by the Wilkinson Microwave Anisotopy Probe (WMAP) satellite, launched by NASA in 2001. The CMB, faint radio waves that are the remnant radiation from the Big Bang, is the earliest 'baby picture' available of the Universe. Irregularities in the CMB show structures that existed only a few hundred thousand years after the Big Bang.

The WMAP satellite measured temperature differences in the CMB that are only millionths of a degree. The cold region in Eridanus was discovered in 2004.

Astronomers wondered if the cold spot was intrinsic to the CMB, and thus indicated some structure in the very early Universe, or whether it could be caused by something more nearby through which the CMB had to pass on its way to Earth. Finding the dearth of galaxies in that region by studying NVSS data resolved that question.

'Although our surprising results need independent confirmation, the slightly lower temperature of the CMB in this region appears to be caused by a huge hole devoid of nearly all matter roughly 6-10 billion light-years from Earth,' Rudnick said.

How does a lack of matter cause a lower temperature in the Big Bang's remnant radiation as seen from Earth?

The answer lies in dark energy, which became a dominant force in the Universe very recently, when the Universe was already three-quarters of the size it is today. Dark energy works opposite gravity and is speeding up the expansion of the Universe. Thanks to dark energy, CMB photons that pass through a large void just before arriving at Earth have less energy than those that pass through an area with a normal distribution of matter in the last leg of their journey.

In a simple expansion of the universe, without dark energy, photons approaching a large mass -- such as a supercluster of galaxies -- pick up energy from its gravity. As they pull away, the gravity saps their energy, and they wind up with the same energy as when they started.

But photons passing through matter-rich space when dark energy became dominant don't fall back to their original energy level. Dark energy counteracts the influence of gravity and so the large masses don't sap as much energy from the photons as they pull away. Thus, these photons arrive at Earth with a slightly higher energy, or temperature, than they would in a dark energy-free Universe.

Conversely, photons passing through a large void experience a loss of energy. The acceleration of the Universe's expansion, and thus dark energy, were discovered less than a decade ago. The physical properties of dark energy are unknown, though it is by far the most abundant form of energy in the Universe today. Learning its nature is one of the most fundamental current problems in astrophysics.

The National Radio Astronomy Observatory is a facility of the National Science Foundation, operated under cooperative agreement by Associated Universities, Inc. This research at the University of Minnesota is supported by individual investigator grants from the NSF and NASA.