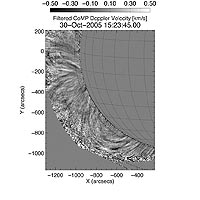 This image shows elusive Alfven waves in the solar corona, captured by a new instrument known as the Coronal Multi-channel Polarimeter instrument, or CoMP.

Scientists for the first time have observed elusive oscillations in the sun's corona, known as Alfvén waves, that transport energy outward from the surface of the sun. The discovery may give researchers more insight into solar magnetic fields, eventually leading to a better understanding of how the sun affects Earth's atmosphere and the entire solar system.

The research, funded by the National Science Foundation (NSF) and led by Steve Tomczyk of the National Center for Atmospheric Research (NCAR) in Boulder, Colo., is being published this week in the journal Science.

By tracking the speed and direction of the waves, researchers will be able to infer basic properties of the solar atmosphere, such as the density and direction of magnetic fields. The waves may provide answers to questions that have puzzled physicists for generations, such as why the sun's corona is hundreds of times hotter than the surface.

'Alfvén waves may provide us with a window into processes that are fundamental to the workings of the sun and its impacts on Earth,' Tomczyk says.

'What makes the solar corona so hot is still a mystery, but these views of Alfven waves provide important new clues,' says Paul Bellaire, program director in NSF's Division of Atmospheric Sciences, which funded the research. 'This discovery may lead to new ways of detecting the onset of solar storms.'

Solar storms that spew thousands of tons of charged particles into space are linked with Alfven waves. They sometimes cause geomagnetic storms on Earth that disrupt sensitive telecommunications and power systems,

'Our observations allowed us to identify these as Alfvén waves,' says co-author Scott McIntosh of the Southwest Research Institute in Boulder. 'The waves are visible all the time and they occur all over the corona, which was surprising.'

Alfvén waves are fast-moving perturbations that emanate outward from the sun along the pathways of magnetic fields, transporting electrodynamic energy. Although they had been detected beyond the sun, they had never before been viewed within the corona, the outermost layer of the sun's atmosphere.

To observe the waves, Tomczyk and his co-authors used an instrument developed at NCAR. The coronal multichannel polarimeter, or CoMP, uses a telescope with a lens roughly eight inches in diameter to gather and analyze light from the corona, which is much dimmer than the Sun itself. It tracks magnetic activity around the entire edge of the Sun and collects data with unusual speed, making a measurement as frequently as every 15 seconds.

By learning more about such magnetic activity and resulting solar disruptions, scientists may be able to better protect astronauts from potentially dangerous levels of radiation in space.

'If we want to go to the moon and Mars, people need to know what's going to happen on the sun,' Tomczyk said.

In addition to Tomczyk and McIntosh, the research team included scientists from the National Solar Observatory, University of Notre Dame, Framingham High School in Massachusetts, and University of Michigan.

News Story Origin and Copyright: NSF
Click here for the original news release.
'We are all in the gutter, but some of us are looking at the stars.'