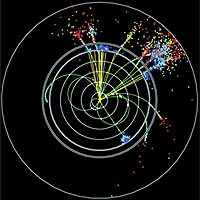 We've all been taught that our bodies, the Earth, and in fact all matter in the universe is composed of tiny building blocks called atoms. Now imagine if this weren't the case. This mind-bending concept is at the core of the scientific research that one Florida State University professor—and hundreds of his colleagues all over the world—are pursuing.

'Recent scientific breakthroughs have shown that most of the matter in the universe—about four-fifths—is not made up of atoms, but of something else, called 'dark matter,' said Howard Baer, FSU's J.D. Kimel Professor of Physics. 'The evidence for dark matter is now overwhelming, and the required amount of dark matter is becoming precisely known.'

Baer explained that dark matter is believed to exist in the form of tiny particles that do not interact with light. Because they don't emit or reflect electromagnetic radiation the way atomic, or baryonic, matter does, these dark matter particles haven't been directly observed. However, scientists have long theorized their existence based on their gravitational effects on visible matter throughout the universe.

'For example, the gravitational effect of dark matter makes galaxies spin faster than one would otherwise expect,' Baer said. 'Also, dark matter's gravitational field distorts the light of objects behind it—creating the so-called 'lensing effect.' By measuring these sorts of phenomena, we can tell that the universe is full of some sort of 'stuff' that we just can't see.'

Despite this progress, the exact identity of dark matter remains a mystery.

'Current constraints on dark matter properties show that the bulk of dark matter cannot be any of the known particles,' Baer said. 'The existence of dark matter is at present one of the strongest pieces of evidence that the current theory of fundamental particles and forces, summarized in the Standard Model of particle physics, is incomplete. At the same time, because dark matter is the dominant form of matter in the universe, an understanding of its properties is essential to determine how galaxies formed and how the universe evolved. Therefore, the discovery of dark matter is among the most important goals in science today.'

A theoretical physicist, Baer employs mathematical models and calculations, as opposed to experimental methods, in an attempt to understand the basic properties of dark matter. To that end, he travels frequently to CERN, the world's largest particle physics laboratory, located on the border between France and Switzerland. At CERN, teams of physicists from all over the world are preparing for the start-up of what will be the world's most powerful particle accelerator, the Large Hadron Collider (LHC), in 2008. With the LHC, they will conduct experiments that seek to solve some of the fundamental mysteries of science, including the identity of dark matter. In addition to searches at the LHC, the hunt for dark matter is progressing at experiments deep underground in Minnesota, under thick Antarctic ice, and even in outer space.

'The identification of dark matter will most likely not be immediate, but will rather unfold gradually,' he said.