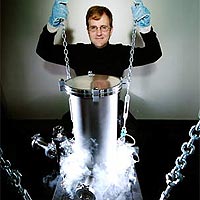 Eric Hudson and colleagues are trying to understand the secrets of high-temperature superconductivity by tracking individual atoms.

When Eric Hudson was introduced to high-temperature superconductivity as a graduate student, it was still, so to speak, a hot topic.

The phenomenon, discovered in the 1980s, reflects the fact that if you develop the right types of compounds, you can create electrical conductors that are completely resistance-free at temperatures well above the threshold for conventional superconductors.

'With conventional systems, you get to about 25 degrees Kelvin [-415? F] and then plateau,' says Hudson, now the Class of 1958 Assistant Professor of Physics at MIT. 'With high-temperature superconductivity, you were suddenly at 90 degrees Kelvin.'

That figure is well above the mark at which nitrogen gas turns liquid. This meant you could create devices like the high-powered electromagnets used in many MRI scanners without having to use costly liquid helium to cool the magnets' coils to superconducting temperatures. (Helium, which liquefies at a hyper-frigid 4 degrees above absolute zero, is a must for conventional superconducting devices.)

More exciting yet, the discovery seemed to signal that room-temperature superconductivity was on its way. This triggered claims that problems like electricity line -losses--the often-hefty amount of power lost to resistance in electrical transmission networks--would soon -disappear.

But tough technological hurdles dampened hopes of a resistance-free electrical grid. And for physicists like Hudson, the prospect of figuring out how high-temperature superconductivity (HTS) works at the scale of electrons and protons also faded.

Hudson was one of them, switching to another challenging physics problem. But the HTS issue continued to lure him, and after two years he resumed his studies of the phenomenon.

Why? Basically because it's so compelling. 'It's a very difficult problem,' he notes, 'and I feel that when we do understand it, that will open up a whole new world, not only in superconductivity but in related systems.'

Hudson has probably helped hasten that day. He's an expert in scanning tunneling microscopy, which is based on the stunning fact that by bringing the right type of tiny metal tip within a few atoms' width of a surface, and generating a voltage between the tip and that surface, you can actually map its individual atoms. (To get a notion of the length scales he's dealing with, consider that an atom of copper--a standard component of many HTS compounds--is to a ping pong ball as the ball is to the moon.)

Now, Hudson and his co-workers have contributed an advance in the technology that promises new progress in unveiling HTS's secrets. Given the all-but infinitesimal size of individual atoms, tunneling microscope users until recently haven't been able to track individual atoms within a compound as they lowered the compound's temperature. By tweaking the makeup of a key part of their microscope, though, the MIT group has solved the problem. That matters, says Hudson.

'If you want to understand what's going on as a function of temperature in these materials,' he explains, 'you need to be able to follow individual atoms.'

The group's recent studies have already undercut one popular theory about the changes that affect HTS materials as their temperature falls. That finding may in turn clear the way for competing hypotheses.

Such advances, and the fact that organizations such as the U.S. Department of Energy are again giving priority to the HTS phenomenon, show the field is regaining its momentum. Yet while the world's first-ever HTS electrical transmission line--an underground Albany-area cable cooled by liquid nitrogen--went live on test basis last year, the steps forward so far don't mean dramatic new applications are imminent.

On the other hand, Hudson does think basic research on the HTS phenomenon is making real head way. 'Things are at a point now,' he says, 'where I believe we'll solve this within my professional lifetime.'