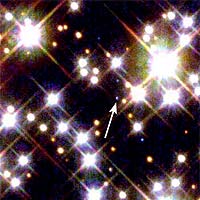 Three unlikely companions - two burned-out stars and a planet - orbit each other near the crowded core of an ancient globular cluster of more than 100,000 stars. Only one companion, however, is visible in the image. In this image, taken by NASA's Hubble Space Telescope, the white arrow points to a burned-out white dwarf star. Radio astronomers discovered the white dwarf and the other burned-out star - a rapidly spinning neutron star, called a pulsar - a decade ago. The third companion's identity was a mystery. Was it a planet or a brown dwarf? The object was too small and too dim to image.

Hubble observations of the dim white dwarf helped astronomers to precisely measure the mass of the mystery object (2.5 times larger than the mass of Jupiter), confirming that it is a planet. In fact, it is the farthest and oldest known planet. Hubble's Wide Field and Planetary Camera 2 resolved individual stars near M4's densely packed core [right] and pinpointed the white dwarf.

The cluster is located 7,200 light-years away in the summer constellation Scorpius. The Hubble image was taken in April 1996.

Long before our Sun and Earth ever existed, a Jupiter-sized planet formed around a sun-like star. Now, 13 billion years later, NASA's Hubble Space Telescope has precisely measured the mass of this farthest and oldest known planet.

The ancient planet has had a remarkable history because it has wound up in an unlikely, rough neighborhood. It orbits a peculiar pair of burned-out stars in the crowded core of a globular star cluster.

The new Hubble findings close a decade of speculation and debate as to the true nature of this ancient world, which takes a century to complete each orbit. The planet is 2.5 times the mass of Jupiter. Its very existence provides tantalizing evidence that the first planets were formed rapidly, within a billion years of the Big Bang, leading astronomers to conclude that planets may be very abundant in the universe.

The planet now lies near+ the core of the ancient globular star cluster M4, located 5,600 light-years away in the summer constellation Scorpius. Globular clusters are deficient in heavier elements because they formed so early in the universe that heavier elements had not been cooked up in abundance in the nuclear furnaces of stars. Some astronomers have therefore argued that globular clusters cannot contain planets. This conclusion was bolstered in 1999 when Hubble failed to find close-orbiting "hot Jupiter"-type planets around the stars of the globular cluster 47 Tucanae. Now, it seems that astronomers were just looking in the wrong place, and that gas-giant worlds orbiting at greater distances from their stars could be common in globular clusters.

"Our Hubble measurement offers tantalizing evidence that planet formation processes are quite robust and efficient at making use of a small amount of heavier elements. This implies that planet formation happened very early in the universe," says Steinn Sigurdsson of Pennsylvania State University, State College.

"This is tremendously encouraging that planets are probably abundant in globular star clusters," says Harvey Richer of the University of British Columbia (UBC), Vancouver, Canada. . He bases this conclusion on the fact that a planet was uncovered in such an unlikely place, orbiting two captured stars --a helium white dwarf and a rapidly spinning neutron star -- near the crowded core of a globular cluster. In such a place, fragile planetary systems tend to be ripped apart due to gravitational interactions with neighboring stars.

The story of this planet's discovery began in 1988, when the pulsar, called PSR B1620-26, was discovered in M4. It is a neutron star spinning just under 100 times per second and emitting regular radio pulses like a lighthouse beam. The white dwarf was quickly found through its effect on the clock-like pulsar, as the two stars orbited each other twice per year. Sometime later, astronomers noticed further irregularities in the pulsar that implied that a third object was orbiting the others. This new object was suspected to be a planet, but it could also be a brown dwarf or a low-mass star. Debate over its true identity continued through the 1990s.

Sigurdsson, Richer, and their co-investigators settled the debate by at last measuring the planet's actual mass through some ingenious celestial detective work. They had exquisite Hubble data from the mid-1990s, taken to study white dwarfs in M4. Sifting through these observations, they were able to detect the white dwarf orbiting the pulsar and measure its color and temperature. Using evolutionary models computed by Brad Hansen of the University of California, Los Angeles, the astronomers estimated the white dwarf's mass. This in turn was compared to the amount of wobble in the pulsar's signal, allowing the team to calculate the tilt of the white dwarf's orbit as seen from Earth. When combined with the radio studies of the wobbling pulsar, this critical piece of evidence told them the tilt of the planet's orbit, too, and so the precise mass could at last be known. With a mass of only 2.5 Jupiters, the object is too small to be a star or brown dwarf, and must instead be a planet. The planet is likely a gas giant without a solid surface like the Earth.

The full team involved in this discovery is composed of Hansen, Richer, Sigurdsson, Ingrid Stairs, UBC, and Stephen Thorsett University of Califronia in Santa Cruz.