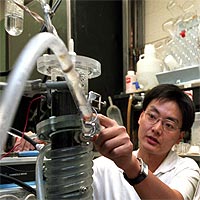 An environmental engineer at Washington University in St. Louis has created a device similar to a hydrogen fuel cell that uses bacteria to treat wastewater and create electricity.

Angenent has created electricity with the device — in its current mode, about the size of a thermos bottle — and says it has to be scaled up considerably to someday handle the two million or so gallons of wastewater it needs to treat to churn out enough power.

'We have proven we can generate electricity on a small scale,' Angenent said. 'It will take time, but we believe the process has potential to be used for local electricity generation.

'The upflow microbial fuel cell is a promising wastewater treatment process and has, as a lab-scale unit, generated electricity and purified artificial wastewater simultaneously for more than five months.'

A description of the process and research is in the July issue of Environmental Science and Technology. Angenent's co-authors are Jason He, his doctoral student, and Shelley D. Minter, Ph.D., of the Saint Louis University Chemistry Department.

Angenent has filed a provisional US patent on the process. He has received a $40,000 Bear Cub award from Washington University to develop the concept. The Bear Cub Fund was initiated by the Washington University vice chancellor for research to support faculty in applied studies not normally supported by federal grants from NIH, NSF, and other sources. The purpose of the awards is to support research or development that is designed to extend basic observations to make them more attractive for licensing by commercial entities or to serve as the 'foundation' for a start-up company.

'We are doing basically the same thing as is done in a hydrogen fuel cell with our microbial fuel cell,' said Angenent, whose graduate student, Jason He has done all the research on the process. 'We've found that the bacteria on the anode electrode can act as the catalyst instead of platinum,'

'The bacteria form a biofilm on the anode electrodes, and what I want to do is optimize this process so that we get higher currents, which should allow us to scale up the system,' Angenent said.

Angenent said that producing energy from wastewater should be a high international priority because of population growth and worldwide depletion of energy resources. Wastewater, with its high-content organic matter, also can produce methane and hydrogen fuels, however, that theoretically more readily usable energy can be produced when electricity is produced directly in a microbial fuel cell. He noted that a bioelectricity generating wastewater treatment system in just one large food-processing plant could power as much as 900 American single-family households.