Wiring the Brain at the Nanoscale 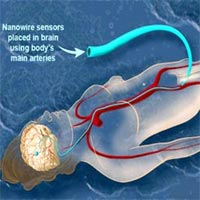 Neuroscientist Rudolfo Llinas and his colleagues envision an entire array of nanowires being connected to a catheter tube, which could then be guided through the circulatory system to the brain. Once there, the nanowires would spread into a kind of bouquet, branching out into tinier and tinier blood vessels until they reached specific locations. Each nanowire would then be used to record the electrical activity of a single nerve cells, or small groups of nerve cells.

Working with platinum nanowires 100 times thinner than a human hair--and using blood vessels as conduits to guide the wires--a team of U.S. and Japanese researchers has demonstrated a technique that may one day allow doctors to monitor individual brain cells and perhaps provide new treatments for neurological diseases such as Parkinson's.

Writing in the July 5, 2005, online issue of The Journal of Nanoparticle Research, the researchers explain it is becoming feasible to create nanowires far thinner than even the tiniest capillary vessels. That means nanowires could, in principle, be threaded through the circulatory system to any point in the body without blocking the normal flow of blood or interfering with the exchange of gasses and nutrients through the blood-vessel walls.

The team describes a proof-of-principle experiment in which they first guided platinum nanowires into the vascular system of tissue samples, and then successfully used the wires to detect the activity of individual neurons lying adjacent to the blood vessels.

Rodolfo R. Llinás of the New York University School of Medicine led the team, which included Kerry D. Walton, also of the NYU medical school; Masayuki Nakao of the University of Tokyo; and Ian Hunter and Patrick A. Anquetil of the Massachusetts Institute of Technology.

'Nanotechnology is becoming one of the brightest stars in the medical and cognitive sciences,' said Mike Roco, Senior Advisor for Nanotechnology at the National Science Foundation (NSF), which funded the research.

Already, the researchers note, physicians routinely use arterial pathways to guide much larger catheter tubes to specific points in the body. This technique is frequently used to study blood flow around the heart, for example.

Following the same logic, the researchers envision connecting an entire array of nanowires to a catheter tube that could then be guided through the circulatory system to the brain. Once there, the wires would spread into a 'bouquet,' branching out into tinier and tinier blood vessels until they reached specific locations. Each nanowire would then be used to record the electrical activity of a single nerve cell or small groups of them.

If the technique works, the researchers say, it would be a boon to scientists who study brain function. Current technologies, such as positron emission tomography (PET) scans and functional magnetic resonance imaging (fMRI), have revealed a great deal about how neural circuits process, say, visual information or language. But the view is still comparatively fuzzy and crude. By providing information on the scale of individual nerve cells, or 'neurons,' the nanowire technique could bring the picture into much sharper focus.

'In this case, we see the first-ever application of nanotechnology to understanding the brain at the neuron-to-neuron interaction level with a non-intrusive, biocompatible and biodegradable nano-probe,' said Roco. 'With careful attention to ethical issues, it promises entirely new areas of study, and ultimately could lead to new therapies and new ways of treating diseases. This illustrates the new generations of nanoscale active devices and complex nanosystems.'

Likewise, the nanowire technique could greatly improve doctors' ability to pinpoint damage from injury and stroke, localize the cause of seizures, and detect the presence of tumors and other brain abnormalities. Better still, Llinás and his coauthors point out, the nanowires could deliver electrical impulses as well as receive them. So the technique has potential as a treatment for Parkinson's and similar diseases.

According to researchers, it's long been known that people with Parkinson's disease can experience significant improvement from direct stimulation of the affected area of the brain. Indeed, that is now a common treatment for patients who do not respond to medication. But the stimulation is currently carried out by inserting wires through the skull and into the brain, a process that can cause scarring of the brain tissue. The hope is, by stimulating the brain with nanowires threaded through pre-existing blood vessels, doctors could give patients the benefits of the treatment without the damaging side effects.

One challenge is to precisely guide the nanowire probes to a predetermined spot through the thousands of branches in the brain's vascular system. One promising solution, the authors say, is to replace the platinum nanowires with new conducting polymer nanowires. Not only do the polymers conduct electrical impulses, conductive, they change shape in response to electric fields, which would allow the researchers to steer the nanowires through the brain's circulatory system. Polymer nanowires have the added benefit of being 20 to 30 times smaller than the platinum ones used in the reported laboratory experiments. They also will be biodegradable, and therefore suitable for short-term brain implants.

'This new class of materials is an attractive tool for nanotechnology,' said MIT's Anquetil. 'The large degrees of freedom that they offer synthetically allow the rational design of their properties.'