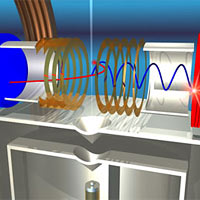 To perform the experiment, a supersonic jet of hydrogen (source at bottom) is ionized by a beam of x-rays from the Advanced Light Source (not shown). The doubly photoionized molecule blows apart, and the protons (red) strike the detector at left while the electrons (blue), trapped in a magnetic field, strike the detector at right. The energy of all the particles and the original orientation of the molecule can be determined from the measured results.

The big world of classical physics mostly seems sensible: waves are waves and particles are particles, and the moon rises whether anyone watches or not. The tiny quantum world is different: particles are waves (and vice versa), and quantum systems remain in a state of multiple possibilities until they are measured — which amounts to an intrusion by an observer from the big world — and forced to choose: the exact position or momentum of an electron, say.

On what scale do the quantum world and the classical world begin to cross into each other? How big does an 'observer' have to be? It's a long-argued question of fundamental scientific interest and practical importance as well, with significant implications for attempts to build solid-state quantum computers.

Researchers at the Department of Energy's Lawrence Berkeley National Laboratory and their collaborators at the University of Frankfurt, Germany; Kansas State University; and Auburn University have now established that quantum particles start behaving in a classical way on a scale as small as a single hydrogen molecule. They reached this conclusion after performing what they call the world's simplest — and certainly its smallest — double slit experiment, using as their two 'slits' the two proton nuclei of a hydrogen molecule, only 1.4 atomic units apart (a few ten-billionths of a meter). Their results appear in the November 9, 2007 issue of Science.
The double slit experiment

'One of the most powerful ways to explore the quantum world is the double slit experiment,' says Ali Belkacem of Berkeley Lab's Chemical Sciences Division, one of the research leaders. In its familiar form, the double slit experiment uses a single light source shining through two slits, side by side in an opaque screen; the light that passes through falls on a screen.

If either of the two slits is closed, the light going through the other slit forms a bright bar on the screen, striking the screen like a stream of BBs or Ping-Pong balls or other solid particles. But if both slits are open, the beams overlap to form interference fringes, just as waves in water do, with bright bands where the wavecrests reinforce one another and dark bands where they cancel.

So is light particles or waves? The ambiguous results of early double slit experiments (the first on record was in 1801) were not resolved until well into the 20th century, when it became clear from both experiment and the theory of quantum mechanics that light is both waves and particles — moreover, that particles, including electrons, also have a wave nature.

'It's the wave nature of electrons that allows them to act in a correlated way in a hydrogen molecule,' says Thorsten Weber of the Chemical Sciences Division, another of the experiment's leading researchers. 'When two particles are part of the same quantum system, their interactions are not restricted to electromagnetism, for example, or gravity. They also possess quantum coherence — they share information about their states nonlocally, even when separated by arbitrary distances.'

'The photon hits only one electron, but because they are correlated, because they cohere in the quantum sense, the electron that's hit flies off in one direction with a certain momentum, and the other electron also flies off at a specific angle to it with a different momentum,' Weber explains.

The experimental set-up used by Belkacem and Weber and their colleagues, being movable, was employed on both beamlines 4.0 and 11.0 of Berkeley Lab's Advanced Light Source (ALS). In the apparatus a stream of hydrogen gas is sent through an interaction region, where some of the molecules are struck by an x-ray beam from the ALS. When the two negatively charged electrons are knocked out of a molecule, the two positively charged protons (the nuclei of the hydrogen atoms) blow themselves apart by mutual repulsion. An electric field in the experiment's interaction region separates the positively and negatively charged particles, sending the protons to one detector and the electrons to a detector in the opposite direction.

'It's what's called a kinematically complete experiment,' Belkacem says, 'one in which every particle is accounted for. We can determine the momentum of all the particles, the initial orientation and distance between the protons, and the momentum of the electrons.'
What the simplest double slit experiment reveals

'At the high photon energies we used for photoionization, most of the time we observed one fast electron and one slow electron,' says Weber. 'What we were interested in was the interference patterns.'

Considered as particles, the electrons fly off at an angle to one another that depends on their energy and how they scatter from the two hydrogen nuclei (the 'double slit'). Considered as waves, an electron makes an interference pattern that can be seen by calculating the probability that the electron will be found at a given position relative to the orientation of the two nuclei.

The wave nature of the electron means that in a double slit experiment even a single electron is capable of interfering with itself. Double slit experiments with photoionized hydrogen molecules at first showed only the self-interference patterns of the fast electrons, their waves bouncing off both protons, with little action from the slow electrons.

As long as both electrons are isolated from their surroundings, quantum coherence prevails, as revealed by the fast electron's wavelike interference pattern. But this interference pattern disappears when the slow electron is made into an observer of the fast one, a stand-in for the larger environment: the quantum system of the fast electron now interacts with the wider world (e.g., its next neighboring particle, the slow electron) and begins to decohere. The system has entered the realm of classical physics.

Not completely, however. And here is what Belkacem calls 'the meat of the experiment': 'Even when the interference pattern has disappeared, we can see that coherence is still there, hidden in the entanglement between the two electrons.'

Although one electron has become entangled with its environment, the two electrons are still entangled with each other in a way that allows interference between them to be reconstructed, simply by graphing their correlated momenta from the angles at which the electrons were ejected. Two waveforms appear in the graph, either of which can be projected to show an interference pattern. But the two waveforms are out of phase with each other: viewed simultaneously, interference vanishes.

If the two-electron system is split into its subsytems and one (the 'observer') is thought of as the environment of the other, it becomes evident that classical properties such as loss of coherence can emerge even when only four particles (two electrons, two protons) are involved. Yet because the two electron subsystems are entangled in a tractable way, their quantum coherence can be reconstructed. What Weber calls 'the which-way information exchanged between the particles' persists.

Says Belkacem, 'For researchers who are trying to build solid-state quantum computers this is both good news and bad news. The bad news is that decoherence and loss of information occur on the very tiny scale of a single hydrogen molecule. The good news is that, theoretically, the information isn't necessarily lost — or at least not completely.'