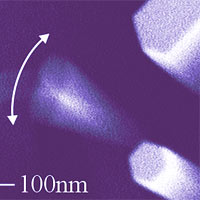 Electron micrograph of a NIST-grown nanowire with a high 'quality factor' vibrating more than 1 million times per second. At lower right, a stationary nanowire shows the typical hexagonal shape of the gallium nitride structures.

Nanowires grown at the National Institute of Standards and Technology (NIST) have a mechanical “quality factor” at least 10 times higher than reported values for other nanoscale devices such as carbon nanotubes, and comparable to that of commercial quartz crystals. Because a high Q factor indicates a capacity for stable vibrations, the nanowires might be used as oscillators in nano-electromechanical systems for future nano-sensors and communications devices.

“We think the most interesting thing about these wires is the very high quality factor observed for such a small object,” says NIST researcher and co-author Kris Bertness, who grew the nanowires.

NIST has developed a unique way of growing hexagonal gallium nitride (GaN) nanowires featuring low defect density and high luminescence intensity. In a new paper*, researchers at NIST and the University of Colorado at Boulder report high Q factors in wires that are 30 to 500 nanometers in diameter and 5 to 20 micrometers long, vibrating between 400,000 and 2.8 million times per second. (For comparison, the quartz crystals used in watches usually vibrate about 32,000 times a second.) The nanowires vibrated when placed on a piezoelectric device stimulated by an electrical signal. The nanowires also oscillated when excited directly by an electron beam, apparently due to the GaN material’s intrinsic piezoelectric ability to covert voltage to mechanical force.

Q measures the damping of oscillations in a mechanical system as a function of frequency—the higher its Q, the longer a bell rings after being struck. Ordinarily, Q factors of mechanical resonators tend to drop as their diameters shrink. But GaN nanowires have a number of properties that may boost their Q and make them suitable as practical oscillators. They have extremely flat and smooth surfaces (irregularities have reduced performance in other oscillators.) GaN also has a resonant frequency similar to silicon (commonly used in microelectronics) but is less susceptible to some sources of “noise.” Finally, GaN has high heat capacity and thermal conductivity, reducing sensitivity to temperature fluctuations. Another practical advantage is that NIST’s GaN nanowires are grown on silicon, making them compatible with existing microelectronics processing methods.

To measure the resonance properties of the nanowires, researchers observed clumps of nanowires using a scanning electron microscope. As the frequency of the applied signal was varied across a range, the nanowires seen in micrographs appear to blur or fan out at or near the resonance frequency. For the nanowire shown in the image, the Q value (about 38,000) is at least 10 times higher than previously reported values for other GaN nanowires, carbon nanotubes, and single-crystal silicon microstructures of similar surface-to-volume ratio. The researchers have measured Q values of more than 1 million in resonating GaN nanowires using feedback (like continuous striking of a bell to keep it ringing), as would occur in a real device.