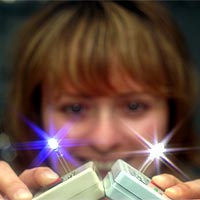 LAUREN ROHWER displays the two solid-state light-emitting devices using quantum dots her team has developed. One is blue and the other is white. (Photo by Randy Montoya)

In a different approach to creating white light several researchers at the Department of Energy’s (DOE) Sandia National Laboratories have developed the first solid-state white light-emitting device using quantum dots. In the future, the use of quantum dots as light-emitting phosphors may represent a major application of nanotechnology.

"Understanding the physics of luminescence at the nanoscale and applying this knowledge to develop quantum dot-based light sources is the focus of this work," says Lauren Rohwer, principal investigator. "Highly efficient, low-cost quantum dot-based lighting would represent a revolution in lighting technology through nanoscience."

The approach is based on encapsulating semiconductor quantum dots — nanoparticles approximately one billionth of a meter in size — and engineering their surfaces so they efficiently emit visible light when excited by near-ultraviolet (UV) light-emitting diodes (LEDs). The quantum dots strongly absorb light in the near UV range and re-emit visible light that has its color determined by both their size and surface chemistry.

This nanophosphor-based device is quite different from an alternative approach based upon growth of blue, green, and red emitting semiconductor materials that requires careful mixing of the those primary colors to produce white illumination. Efficiently extracting all three colors in such a device requires costly chip designs, which likely cannot compete with conventional fluorescent lighting but can be attractive for more specialized lighting applications.

Quantum dots represent a new approach. The nanometer-size quantum dots are synthesized in a solvent containing soap-like molecules called surfactants as stabilizers. The small size of the quantum dots — much smaller than the wavelength of visible light — eliminates all light scattering and the associated optical losses. Optical backscattering losses using larger conventional phosphors reduce the package efficiency by as much as 50 percent.

Nanophosphors based upon quantum dots have two significant advantages over the use of conventional bulk phosphor powders. First, while the optical properties of conventional bulk phosphor powders are determined solely by the phosphor’s chemical composition, in quantum dots the optical properties such as light absorbance are determined by the size of the dot. Changing the size produces dramatic changes in color. The small dot size also means that, typically, over 70 percent of the atoms are at surface sites so that chemical changes at these sites allow tuning of the light-emitting properties of the dots, permitting the emission of multiple colors from a single size dot.

"This provides two additional ways to tune the optical properties in addition to chemical composition of the quantum dot material itself," Wilcoxon says.

For the quantum dots to be used for lighting, they need to be encapsulated, usually in epoxy or silicone.

"Doing this we had to take care not to alter the surface chemistry of the quantum dots in transition from solvent to encapsulant," says Thoma, who worked on the encapsulation portion of the project.

Quantum dot phosphors are integrated with a commercial LED chip that emits in the near ultraviolet at 400 nanometers by encapsulating the chip with a dot-filled epoxy, creating a dome. The quantum dots in the dome absorb the invisible 400 nanometer light from the LED and reemit it in the visible region — a principle similar to that used in fluorescent lighting.

However, a key technical issue in the encapsulation process had to be solved first. When altering the environment of the dots from a solvent to an encapsulant, the quantum dots would "clump up" or agglomerate, causing them to lose their light-emitting properties. By attaching the quantum dots to the "backbone" of the encapsulating polymer they are close, but not touching. This allows for an increase in efficiency from 10-20 percent to an amazing 60 percent, Thoma says.

The team notes that other people working in the field of quantum dots have reported conversion efficiencies of nearly 50 percent in dilute solutions. However, to their knowledge, Sandia’s team is the first to make an encapsulated quantum dot device with such high efficiencies.

To date, the Sandia’s quantum dot devices have largely been composed of the semiconductor material cadmium sulfide. Cadmium is a toxic heavy metal similar to lead so alternative nanophosphor materials are desired. Fortunately, quantum dot phosphors can also be made from other types of materials, including nontoxic nanosize silicon or germanium semiconductors with light-emitting ions like mangenese on the quantum dot surface.

"Silicon, which is abundant, cheap, and non-toxic, would be an ideal material," says Woessner. "The scientific insights gained through the team’s success with cadmium sulfide quantum dots will enable this next step in nanophosphor development."

In the next year the researchers will increase the concentration of the quantum dots in the encapsulant to obtain further increases in light output while extending the understanding of quantum dot electronic interactions at high concentrations.

While the researchers investigate the use of quantum dots as phosphors as part of an internally funded research project, they also have a grant from the DOE Office of Building Technologies for a collaborative project with Lumileds Lighting, a joint venture between Agilent Technologies and Philips Lighting. In this project they are helping Lumileds measure quantum efficiency of light emission from various types of dots.

Jerry Simmons, who with James Gee, heads up the Sandia’s Solid State Lighting grand challenge, says the quantum dot research is an integral part of the work at Sandia.

"We are very proud of these accomplishments," Simmons says. "The team has come a long way in a short time."