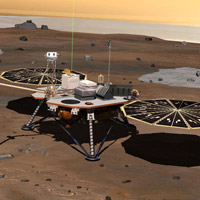 NASA's Phoenix Mars Lander monitors the atmosphere overhead and reaches out to the soil below in this artist's depiction of the spacecraft fully deployed on the surface of Mars.

Phoenix has been assembled and tested for launch in August 2007 from Cape Canaveral Air Force Station, Fla., and for landing in May or June 2008 on an arctic plain of far-northern Mars. The mission responds to evidence returned from NASA's Mars Odyssey orbiter in 2002 indicating that most high-latitude areas on Mars have frozen water mixed with soil within arm's reach of the surface.

Phoenix will use a robotic arm to dig down to the expected icy layer. It will analyze scooped-up samples of the soil and ice for factors that will help scientists evaluate whether the subsurface environment at the site ever was, or may still be, a favorable habitat for microbial life. The instruments on Phoenix will also gather information to advance understanding about the history of the water in the icy layer. A weather station on the lander will conduct the first study of Martian arctic weather from ground level. The vertical green line in this illustration shows how the weather station on Phoenix will use a laser beam from a lidar instrument to monitor dust and clouds in the atmosphere. The dark 'wings' to either side of the lander's main body are solar panels for providing electric power.

The Phoenix mission is led by Principal Investigator Peter H. Smith of the University of Arizona, Tucson, with project management at NASA's Jet Propulsion Laboratory and development partnership with Lockheed Martin Space Systems, Denver. International contributions for Phoenix are provided by the Canadian Space Agency, the University of Neuchatel (Switzerland), the University of Copenhagen (Denmark), the Max Planck Institute (Germany) and the Finnish Meteorological institute. JPL is a division of the California Institute of Technology in Pasadena.

NASA's next Mars mission will look beneath a frigid arctic landscape for conditions favorable to past or present life.

Instead of roving to hills or craters, NASA's Phoenix Mars Lander will claw down into the icy soil of the Red Planet's northern plains. The robot will investigate whether frozen water near the Martian surface might periodically melt enough to sustain a livable environment for microbes. To accomplish that and other key goals, Phoenix will carry a set of advanced research tools never before used on Mars.

First, however, it must launch from Florida during a three-week period beginning Aug. 3, then survive a risky descent and landing on Mars next spring.

'Our 'follow the water' strategy for exploring Mars has yielded a string of dramatic discoveries in recent years about the history of water on a planet where similarities with Earth were much greater in the past than they are today,' said Doug McCuistion, director of the Mars Exploration Program at NASA Headquarters, Washington. 'Phoenix will complement our strategic exploration of Mars by being our first attempt to actually touch and analyze Martian water -- water in the form of buried ice.'

NASA's Mars Odyssey orbiter found evidence in 2002 to support theories that large areas of Mars, including the arctic plains, have water ice within an arm's reach of the surface.

'Phoenix has been designed to examine the history of the ice by measuring how liquid water has modified the chemistry and mineralogy of the soil,' said Peter Smith, the Phoenix principal investigator at the University of Arizona, Tucson.

'In addition, our instruments can assess whether this polar environment is a habitable zone for primitive microbes. To complete the scientific characterization of the site, Phoenix will monitor polar weather and the interaction of the atmosphere with the surface.'

With its flanking solar panels unfurled, the lander is about 5.5 meters (18 feet) wide and 1.5 meters (5 feet) long. A robotic arm 2.3 meters (7.7 feet) long will dig to the icy layer, which is expected to lie within a few inches of the surface. A camera and conductivity probe on the arm will examine soil and any ice there. The arm will lift samples to two instruments on the lander's deck. One will use heating to check for volatile substances, such as water and carbon-based chemicals that are essential building blocks for life. The other will analyze the chemistry of the soil.

A meteorology station, with a laser for assessing water and dust in the atmosphere, will monitor weather throughout the planned three-month mission during Martian spring and summer. The robot's toolkit also includes a mast-mounted stereo camera to survey the landing site, a descent camera to see the site in broader context and two microscopes.

For the final stage of landing, Phoenix is equipped with a pulsed thruster method of deceleration. The system uses an ultra-lightweight landing system that allows the spacecraft to carry a heavier scientific payload. Like past Mars missions, Phoenix uses a heat shield to slow its high-speed entry, followed by a supersonic parachute that further reduces its speed to about 217 kilometers per hour (135 miles per hour). The lander then separates from the parachute and fires pulsed descent rocket engines to slow to about 9 kilometers per hour (5.5 miles per hour) before landing on its three legs.

'Landing safely on Mars is difficult no matter what method you use,' said Barry Goldstein, the project manager for Phoenix at NASA's Jet Propulsion Laboratory, Pasadena, Calif. 'Our team has been testing the system relentlessly since 2003 to identify and address whatever vulnerabilities may exist.'

Researchers evaluating possible landing sites have used observations from Mars orbiters to find the safest places where the mission's goals can be met. The leading candidate site is a broad valley with few boulders at a latitude equivalent to northern Alaska.