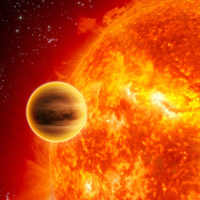 Scientists have reported the first conclusive discovery of water vapor in the atmosphere of an exoplanet, or a planet beyond our solar system.

This artist's impression shows a gas-giant exoplanet transiting across the face of its star. Infrared analysis by NASA's Spitzer Space Telescope of this type of system provided the breakthrough.

The planet, HD 189733b, lies 63 light-years away in the constellation Vulpecula. It was discovered in 2005 as it transited its parent star, dimming the star's light by some three percent.

A scorching-hot gas planet beyond our solar system is steaming up with water vapor, according to new observations from NASA's Spitzer Space Telescope.

The planet, called HD 189733b, swelters as it zips closely around its star every two days or so. Astronomers had predicted that planets of this class, termed 'hot Jupiters,' would contain water vapor in their atmospheres. Yet finding solid evidence for this has been slippery. These latest data are the most convincing yet that hot Jupiters are 'wet.'

'We're thrilled to have identified clear signs of water on a planet that is trillions of miles away,' said Giovanna Tinetti, a European Space Agency fellow at the Institute d’Astrophysique de Paris in France.' Tinetti is lead author of a paper on HD 189733b appearing today in Nature.

Although water is an essential ingredient to life as we know it, wet hot Jupiters are not likely to harbor any creatures. Previous measurements from Spitzer indicate that HD 189733b is a fiery 1,000 Kelvin (1,340 degrees Fahrenheit) on average. Ultimately, astronomers hope to use instruments like those on Spitzer to find water on rocky, habitable planets like Earth.

'Finding water on this planet implies that other planets in the universe, possibly even rocky ones, could also have water,' said co-author Sean Carey of NASA's Spitzer Science Center at the California Institute of Technology in Pasadena. 'I'm excited to tell my nephews and niece about the discovery.'

The new findings are part of a brand new field of science investigating the climate on exoplanets, or planets outside our solar system. Such faraway planets cannot be seen directly; however, in the past few years, astronomers have begun to glean information about their atmospheres by observing a subset of hot Jupiters that transit, or pass in front of, their stars as seen from Earth.

Earlier this year, Spitzer became the first telescope to analyze, or break apart, the light from two transiting hot Jupiters, HD 189733b and HD 209458b. One of its instruments, called a spectrometer, observed the planets as they dipped behind their stars in what is called the secondary eclipse. This led to the first-ever 'fingerprint,' or spectrum, of an exoplanet's light. Yet, the results came up 'dry,' probably because the structure of these planets' atmospheres makes finding water with this method difficult.

Later, a team of astronomers found hints of water in HD 209458b by analyzing visible-light data taken by NASA's Hubble Space Telescope. The Hubble data were captured as the planet crossed in front of the star, an event called the primary eclipse.

Now, Tinetti and her team have captured the best evidence yet for wet, hot Jupiters by watching HD 189733b's primary eclipse in infrared light with Spitzer. In this method, changes in infrared light from the star are measured as the planet slips by, filtering starlight through its outer atmosphere. The astronomers observed the eclipse with Spitzer's infrared array camera at three different infrared wavelengths and noticed that for each wavelength a different amount of light was absorbed by the planet. The pattern by which this absorption varies with wavelength matches that created by water.

'Water is the only molecule that can explain that behavior,' said Tinetti. 'Observing primary eclipses in infrared light is the best way to search for this molecule in exoplanets.'

The water on HD 189733b is too hot to condense into clouds; however, previous observations of the planet from Spitzer and other ground and space-based telescopes suggest that it might have dry clouds, along with high winds and a hot, sun-facing side that is warmer than its dark side. HD 189733b is located 63 light-years away in the constellation Vulpecula.