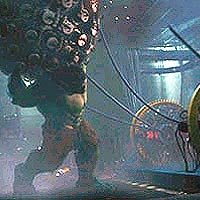 DON'T TRY THIS AT HOME — The Hulk hefts the Gammasphere in a scene from the upcoming science-fiction movie. In reality, the 14-ton instrument is the world's most sensitive gamma-ray 'microscope,' used to study the atomic nucleus. Photo courtesy of Universal Studios.

In reality, Gammasphere is a mild-mannered instrument for detecting, not producing, gamma rays. It is the world's most sensitive gamma-ray "microscope," designed to help answer fundamental questions about the structure and behavior of atomic nuclei, and study rare and exotic nuclear processes. Much of the research conducted with Gammasphere concentrates on those forms of nuclei that contain large excesses of protons and neutrons.

The 10-foot-tall, 14-ton device is a silvery machined aluminum sphere about seven feet in diameter, pierced by 110 holes. Yard-long gamma-ray detectors fit through the holes, with their plunted tips converging near the center of the sphere.

The detectors are cooled to -320 degrees F (-196 degrees C) with liquid nitrogen — 200 gallons a day — to increase their sensitivity. Beams of ions from the Argonne Tandem Linac Accelerator System (ATLAS) strike a target in the center of Gammasphere, where some of the nuclei from the beam fuse with nuclei in the target.

The gamma rays produced by these interactions give scientists information about the structure and forces inside atomic nuclei. Physicists also hope to find out if isotopes with the most unusual neutron-to-proton ratios exhibit new characteristics that don't occur in stable nuclei.

Gammasphere is a national facility funded by the U.S. Department of Energy's Office of Science. Click here to go to the Gammasphere website.