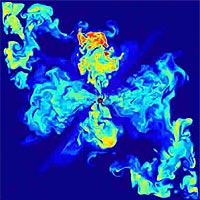 Gas accreting into a black hole

A $900,000 supercomputer at the University of Toronto - the fastest computer in Canada -- is heating up astrophysics research in this country and burning its way up the list of the world's fastest computers.

The new computer, part of the Department of Astronomy and Astrophysics and the Canadian Institute for Theoretical Astrophysics (CITA), was ranked as the fastest computer in Canada and the 39th fastest in the world in the latest list from www.top500.org, compiled by the Universities of Mannheim and Tennessee and the National Energy Research Scientific Computing Center at Lawrence Berkeley National Laboratory.

"An essential element of modern astrophysics is the ability to carry out large-scale simulations of the cosmos, to complement the amazing observations being undertaken," said Professor Peter Martin, chair of astronomy and astrophysics and a CITA investigator. "With the simulations possible on this computer, we have in effect a laboratory where we can test our understanding of astronomical phenomena ranging from the development of structure in the universe over 14 billion years to the development of new planets in star-forming systems today."

When the computer, created by the HPC division of Mynix Technology of Montreal (now a part of Ciara Technologies), starts its calculations, the 512 individual central processing units can heat up to 65 C, requiring extra ventilation and air-conditioning to keep the unit functioning.

But with that heat comes the capability of performing more than one trillion calculations per second, opening the door to more complex and comprehensive simulations of the universe. It is the only Canadian machine to break the Teraflop barrier -- one trillion calculations per second -- and it's the fastest computer in the world devoted to a wide spectrum of astrophysics research.

"This new computer lets us solve a variety of problems with better resolution than can be achieved with any other supercomputer in Canada," said Chris Loken, CITA's computing facility manager. "Astrophysics is a science that needs a lot of computer horsepower and memory and that's what this machine can provide. The simulations are also enabled by in-house development of sophisticated parallel numerical codes that fully exploit the computer's capabilities."

The machine, nicknamed McKenzie (after the McKenzie Brothers comedy sketch on SCTV), with 268 gigabytes of memory and 40 terabytes of disk space, consists of two master nodes (Bob and Doug), 256 compute nodes, and eight development nodes. All of these are networked together using a novel gigabit networking scheme that was developed and implemented at CITA. Essentially, the two gigabit Ethernet ports on each node are used to create a "mesh" that connects every machine directly to another machine and to one of 17 inexpensive gigabit switches. It took four people about two days and two kilometres of cable to connect this network. The unique CITA design drives down the networking cost in the computer by at least a factor of five and the innovative system has attracted industry attention.

Professor John Dubinski has used the new computer to examine both the formation of cosmological structure and the collisions of galaxies by simulating the gravitational interaction of hundreds of millions of particles representing stars and the mysterious dark matter. The anticipated collision of the Milky Way Galaxy with our neighbouring Andromeda galaxy - an event predicted to take place in three billion years time - has been modeled at unprecedented resolution.

New simulations on the formation of supermassive black holes, again with the highest resolution to date, have been carried out by his colleagues Professors Ue-Li Pen and Chris Matzner. They have already uncovered clues which may explain the mystery of why the black hole at the center of our galaxy is so much fainter than had been expected theoretically.

The team has even grander plans for the future. "In astrophysics at the University of Toronto we have continually exploited the latest computing technology to meet our requirements, always within a modest budget," Martin said. "This is a highly competitive science and to maintain our lead we are planning a computer some ten times more powerful."

Funding for the computer was provided by the Canada Foundation for Innovation and the Ontario Innovation Trust.