3-D Multilayered Optical Structures Made Without A Clean Room 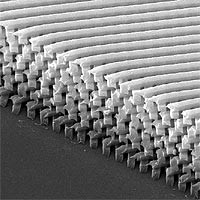 Achieving a first in the world of novel optical materials, researchers at the U. S. Department of Energy’s Ames Laboratory are making 3-D photonic band gap crystals four millimeters square (approximately one-eighth of an inch square) and 12 layers high without benefit of a “clean room” environment or the multimillion dollar equipment traditionally required to create such structures. The fundamental research, supported by the Basic Energy Sciences Office of the DOE’s Office of Science, holds potential for significantly reducing the costs associated with fabricating PBG crystals, devices that make it possible to route, manipulate and modify the properties of light.

PBG crystals can permit or block the transmission of light of certain frequencies in all directions. This characteristic makes them especially promising for applications in the field of optical communications, where the push is on to create a photonic crystal within a single computer chip.

The research path to that goal is an unbelievably expensive one. But Kai-Ming Ho, an Ames Laboratory senior physicist, and Kristen Constant, an Iowa State University associate professor of materials science and engineering, and their co-workers are easing the way by fabricating PBG crystal microstructures in the open air, something that has never been done before.

The project is based on Ho’s original 1990 research that theoretically demonstrated the existence of the first PBG crystal through his diamond lattice structure design.

That unique design is key to the multilayered PBGs that are being fabricated by members of Ho’s and Constant’s research groups. They have adapted a technique called microtransfer molding to make templates for the fabrication of multilayered photonic band gap crystals.

“The microtransfer mold technique is not new,” said Ho, who is also an ISU distinguished professor of physics and astronomy. “Modifying it to create multilevel lattice structures at micron- and submicron-length scales – that is the new advance.”

The modified technique involves meticulous work at the micron-scale level. (For size reference, the period at the end of this sentence equals approximately 615 microns.) First, an elastomer mold is created with more than 1,000 microchannels on its surface. The channels are filled by hand with a liquid polymer filler. The filler is then solidified by ultraviolet light. Next, the solidified polymer rods in the channels are coated with a second polymer that acts as a glue, bonding the filler to a silicon wafer substrate. Once hardened, the elastomer mold is peeled off, leaving a set of parallel polymer rods on the substrate – one layer of the polymer template. By repeating the procedure, in principle, any number of multilayer structures is achievable. To convert the template to a ceramic photonic crystal, the template is over-infiltrated with a titania slurry. The structure is fired to 550 degrees Celsius (1022 F) to remove the template and sinter the titania structure.

Ho and Constant credit many of the fabrication advances to the unique skills of the young scientists they mentor: postdoctoral fellow Chang-Hwan Kim; current graduate students Jae-Hwang Lee, Yong-Sung Kim, and Ping Kuang; and former graduate student Henry Kang, now at Hewlett Packard in Oregon. They are conquering what is perhaps the biggest challenge – aligning the multiple layers that make up the PBG crystals.

The 1,000 plus rods per layer in a four-millimeter-square PBG crystal are only 2.5 microns apart. “The placement of each rod is so precise,” said Constant. “It’s hard to imagine that we can put something down within a micron or half a micron.”

Ho added, “If you make a mistake in one layer, it will disrupt the next one and spoil the rest of the sample. In order to build multilayers, you need to get things right successively.”

Lee knows the kind of concentration that requires. He has constructed a 12-layer template for a PBG crystal and modestly admitted, “I can stack more than this; however, it will task my patience!”

To improve the alignment, Lee and Chang-Hwan Kim came up with an ingenious method based on diffracted moiré fringes that has proven indispensable. Ho explained, “Photonic crystals are periodic structures, so any shifts in periodicity will show up over a much larger area. Those shifts are called fringes,” he said. The better the alignment, the farther apart those fringes are spaced, so the fringe pattern tells you how good the alignment is.”

Constant praised the project’s blended research team of physicists and materials scientists. “We’ve established an expertise with microtransfer molding. When people hear that we’re doing this in open air, it really amazes them. It amazes me, too,” she admitted, “especially when you realize that a speck of dust can disrupt the whole structure.”

Ho noted that the care and expertise of the project’s team members was overcoming the open-air obstacles. “It’s a high-quality, low-cost process – that’s the key – and it’s achieved by a lot of engineering ingenuity,” he said.