Physicists Create a 'Perfect' Way to Study the Big Bang 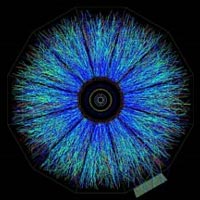 When two gold nuclei collide in the RHIC particle accelerator, Brookhaven, they produce a cascade of new particles. Each line on these images shows the path of one of those particles. The STAR detector captured these traces. By analysing the type and quantity of the particles produced, along with the direction in which the particles moved, physicists revealed that a new state of matter had been produced.

Physicists have created the state of matter thought to have filled the Universe just a few microseconds after the big bang and found it to be different from what they were expecting. Instead of a gas, it is more like a liquid. Understanding why it is a liquid should take physicists a step closer to explaining the earliest moments of our Universe.

Not just any old liquid, either. Its collective movement is rather like the way a school of fish swims ‘as one’ and is a sign that the fluid possesses an extremely low viscosity, making it what physicists call a perfect fluid. In fact, tentative calculations suggest its extraordinarily low viscosity makes it the most perfect fluid ever created.

Researchers had confidently believed it would be something like ‘steam’, consisting of free quarks and gluons. “No one predicted that it would be a liquid,” said Professor John Nelson from the University of Birmingham, who heads the British involvement in the STAR Collaboration, a multinational experiment. “This aspect was totally unexpected,” said Professor Nelson, “and will lead to new scientific research regarding the properties of matter at extremes of temperature and density, previously inaccessible in a laboratory.”

The Birmingham contingent is funded entirely by the Engineering and Physical Sciences Research Council (EPSRC).

The new state of matter was forged in the Relativistic Heavy Ion Collider (RHIC), situated at the Brookhaven National Laboratory, Long Island, New York. By colliding the central cores of gold atoms together, head-on at almost the speed of light, the researchers created a fleeting, microscopic version of the Universe a few microseconds after the Big Bang. This included achieving a temperature of several million million degrees (about 150,000 times the temperature at the centre of the Sun). They then detected the rush of particles that this miniature ‘big bang’ created. That was when things started to take an unexpected turn.

Instead of the ‘every-particle-for-itself, free-for-all’ that is expected from a gas, the researchers saw evidence of collective movement as the hot matter, formed at RHIC, flowed out of the collision site. This indicated stronger interactions between the particles than expected, leading to the belief that the quark-gluon plasma is behaving like a liquid.

This type of experiment furthers our understanding of what happened in the instants immediately following the Big Bang, leading to a better understanding of the earliest moments of the Universe. However, the unexpected nature of this new state of matter is leaving physicists wondering if the current theoretical models can support these surprising new experimental results.

The early Universe is thought to have been a place of extraordinarily high temperatures and energies. Matter as we know it could not exist under those conditions. Rather like an ice cube placed in a hot oven, atoms dissolve into a new state of matter consisting of minuscule particles, the most significant of which are known as quarks and gluons.

For over twenty years, physicists have been searching for the quark-gluon plasma, because of the insights it can give into the earliest moments of the Universe and the structure of matter. However, this latest development is much more unusual than anyone expected.

There is a suggestion that certain versions of string theory may be able to explain the ‘liquid’ behaviour of the quark-gluon plasma. Professor Nelson expects that progress will be made during the forthcoming Quark Matter 2005 conference in Budapest in August. “Although these findings did not fit with expectations, the theories are slowly coming into line. Hearing the theoretical developments is going to be the high point of the conference,” said Professor Nelson.

EPSRC (under its previous name of SERC) was the first British research council to fund heavy ion collision experiments. Starting in the mid 1980s, they made it possible for British nuclear physicists from Birmingham to participate in such experiments at CERN (the European Centre for Nuclear Research).

Professor John Nelson heads an EPSRC-funded research group of five staff members and four PhD students at the University of Birmingham, UK. Together they contribute to the STAR experiment running on RHIC.

STAR is one of four particle detection experiments running at RHIC. The name is an acronym for Solenoidal Tracker At RHIC. The experimental apparatus wraps itself around the collision site and tracks the particles given off, providing the information necessary for physicists to determine the nature of each particle produced in the collision.

STAR is one of four complementary experiments running at RHIC. The other three are BRAHMS, PHENIX and PHOBOS. All four experiments corroborate the nature of the quark-gluon plasma found at RHIC.

Quark Matter 2005 is the 18th International conference on nucleus-nucleus collisions. It is taking place from 4–9 August, in Budapest, Hungary.

EPSRC
The Engineering and Physical Sciences Research Council (EPSRC) is the UK’s main agency for funding research in engineering and the physical sciences. The EPSRC invests more than £500 million a year in research and postgraduate training, to help the nation handle the next generation of technological change. The areas covered range from information technology to structural engineering, and mathematics to materials science. This research forms the basis for future economic development in the UK and improvements for everyone’s health, lifestyle and culture. EPSRC also actively promotes public awareness of science and engineering. EPSRC works alongside other Research Councils with responsibility for other areas of research. The Research Councils work collectively on issues of common concern via Research Councils UK.