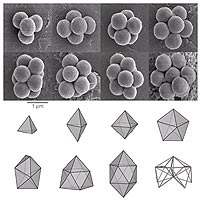 When compressed by a liquid droplet, small groups of colloidal microspheres -- plastic spheres with diameters about one one-hundredth that of a human hair -- pack to form an unusual sequence of structures. At top are packings containing four to eleven spheres, as seen through the scanning electron microscope. At bottom are the polyhedra defined by drawing lines between the centers of touching spheres in each cluster. Some of these polyhedra are familiar structures, such as the tetrahedron (4 spheres) and octahedron (6 spheres), but most of the others -- including the

Three years before he received the Nobel Prize in Physics, Eugene Wigner published an article entitled "The Unreasonable Effectiveness of Mathematics in the Natural Sciences" (1960). He marveled at how often physicists develop concepts to describe the "real" world only to discover that mathematicians--heedless of that real world--have already thought up and explored the concepts. His own experience of the uncanny applicability of mathematical insights to the physical reality of quantum mechanics led Wigner to observe "that the enormous usefulness of mathematics in the natural sciences is something bordering on the mysterious and that there is no rational explanation for it."

Doubtless the observation of just such an uncanny correspondence between mathematics and physics prompted the editors of the July 25 issue of Science to feature on the cover the colloidal particle clusters that are the subject of research by an engineering professor and his two graduate students at the University of California at Santa Barbara (UCSB). That professor, David Pine, holds a joint appointment in the departments of Chemical Engineering and Materials and chairs the Chemical Engineering Department. The first author of the article, "Dense Packing and Symmetry in Small Clusters of Microspheres," is Vinothan Manoharan; the other author is Mark Elsesser.

Their story begins with the iridescence of opals, which are composed of equal-sized spheres about a micrometer in diameter, or roughly a hundred times smaller than the size of a human hair. The spheres are packed into a structure known as the face-centered cubic (FCC) lattice, which is exactly the same arrangement used by grocers to stack oranges or apples. Because the opal's constituent spheres are about the size of the wavelength of light, their orderly arrangement diffracts light and causes iridescence.

Pine notes, "Opals have interesting optical properties, but not quite interesting enough. We are trying to improve on this structure to make some useful optical materials."

In principle such materials, known as "photonic crystals," would enable new and inexpensive optical circuits and might also improve the efficiency of devices such as lasers and LEDs. How to make a photonic crystal is not the subject of the Science article, but what the researchers discovered in the attempt.

The experiments which answered that question began with Manoharan taking colloidal microspheres of the common plastic polystyrene and trapping the particles in small droplets of the oily solvent toluene. Then he heated the mixture so that the solvent droplets evaporated, effectively shrink-wrapping the particles into little clusters. Finally, using a centrifuge, he separated the clusters according to the number of particles in each i.e., doublets, triplets, etc.

"The thing that really grabbed our attention," said Manoharan, "was that clusters that contained the same number of particles always had the same configuration." Or, in the language of the Science paper, "small numbers (n = 2-15) of hard spheres pack into distinct and identical polyhedra for each value of n." Moreover, when Manoharan examined the clusters under the microscope, he found that many of the structures had beautiful and unexpected symmetry. The seven-sphere cluster, for example, resembles a flower with five petals.

Surprisingly, the symmetry of these configurations has nothing to do with chemical bonds or quantum mechanics. The clusters, it turns out, obey a very simple mathematical principle first explored in 1995 by mathematicians N.J.A. Sloane of AT&T Research, John Conway of Princeton, and colleagues. Sloane and Conway derived the structures of sphere packings that minimize a quantity called the "second moment of the mass distribution."

The structures the mathematicians predicted are the same as those of the colloidal clusters. "What's amazing," said Pine, "is that their interests had nothing to do with colloids or emulsions. They were studying a problem in pure mathematics."

What is the "second moment"? Said Pine, "Take one of these clusters and define its center of gravity as the point at which if you hang the cluster by a string it will not rotate. Then you take the distances of each of these spheres from that center of gravity (measuring from the center of the sphere) and square those distances and add the squares together, and that's the second moment of the mass distribution."

The researchers caution that they do not yet fully understand the physical process that causes the clusters to minimize this quantity. But the mathematical connection has a certain elegance.

"Occasionally," said Pine, "there's a correspondence between mathematics and the way nature behaves that's really striking. Most of the time the connection is difficult to visualize, but in this case a layperson can explore it with only a package of ping-pong balls and some glue."

Manoharan points out that their results may be relevant to fields other than colloids, since scientists often model the building blocks of matter as spheres. "These clusters tell us something about matter in general-how symmetry arises from simple packing constraints. That may be important in understanding the atomic-scale structure of liquids, for example. Between the mathematical beauty of the cluster structures and their engineering applications, there is some interesting physics in terms of understanding how geometry affects the basic properties of matter."

The research reported in Science is part of Manoharan's thesis for a Ph.D. from Santa Barbara in chemical engineering. He has accepted a faculty appointment in physics and engineering at Harvard University after a postdoctoral fellowship at the University of Pennsylvania.

The research is supported by the National Science Foundation (NSF) and the Unilever Corp.