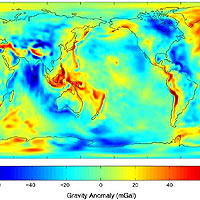 The joint NASA-German Aerospace Center Gravity Recovery and Climate Experiment (Grace) mission has released its first science product, the most accurate map yet of Earth’s gravity field. Grace is the newest tool for scientists working to unlock secrets of ocean circulation and its effects on climate.

Created from 111 days of selected Grace data to help calibrate and validate the mission’s instruments, this preliminary model improves knowledge of the gravity field so much it is being released to oceanographers now, months in advance of the scheduled start of routine Grace science operations. The data are expected to significantly improve our ability to understand ocean circulation, which strongly influences weather and climate.

Dr. Byron Tapley, Grace principal investigator at the University of Texas’ Center for Space Research, called the new model a feast for oceanographers. “This initial model represents a major advancement in our knowledge of Earth’s gravity field,” Tapley said. “Pre-Grace models contained such large errors many important features were obscured. Grace brings the true state of the oceans into much sharper focus, so we can better see ocean phenomenon that have a strong impact on atmospheric weather patterns, fisheries and global climate change.”

Grace is accomplishing that goal by providing a more precise definition of Earth’s geoid, an imaginary surface defined only by Earth’s gravity field, upon which Earth’s ocean surfaces would lie if not disturbed by other forces such as ocean currents, winds and tides. The geoid height varies around the world by up to 200 meters (650 feet).

"I like to think of the geoid as science’s equivalent of a carpenter’s level. It tells us where horizontal is," Tapley said. “Grace will tell us the geoid with centimeter-level precision.”

So why is knowing the geoid height so important? Dr. Lee-Lueng Fu, Topex/Poseidon and Jason project scientist at NASA’s Jet Propulsion Laboratory, Pasadena, Calif., said, “The ocean’s surface, while appearing flat, is actually covered with hills and valleys caused by currents, winds and tides, and also by variations in Earth’s gravity field. Scientists want to separate out these gravitational effects, so they can improve the accuracy of satellite altimeters like Jason and Topex/Poseidon, which measure sea surface height, ocean heat storage and global ocean circulation. This will give us a better understanding of ocean circulation and how it affects climate."

Dr. Michael Watkins, Grace project scientist at JPL, put improvements to Earth’s gravity model into perspective. "Scientists have studied Earth’s gravity for more than 30 years, using both satellite and ground measurements that were of uneven quality. Using just a few months of our globally uniform quality Grace data, we’ve already improved the accuracy of Earth’s gravity model by a factor of between 10 and nearly 100, depending on the size of the gravity feature. In some locations, errors in geoid height based upon previous data were as much as 1 meter (3.3 feet). Now, we can reduce these errors to a centimeter (.4 inches) in some instances. That’s progress."

Dr. Christoph Reigber, Grace co-principal investigator at GeoForschungsZentrum Potsdam, said, "As we continue to assess and refine Grace’s instruments and subsystems, we’re confident future monthly gravity solutions will be even better than the map we’re releasing now. Those solutions will allow us to investigate processes associated with slow redistribution of mass inside Earth and on its land, ocean and ice surfaces. Our initial attempts to identify such small gravity signals with Grace look very promising."

Grace senses minute variations in gravitational pull from local changes in Earth’s mass by precisely measuring, to a tenth of the width of a human hair, changes in the separation of two identical spacecraft following the same orbit approximately 220 kilometers (137 miles) apart. Grace will map the variations from month to month, following changes imposed by the seasons, weather patterns and short-term climate change.

Grace is a joint partnership between NASA and the German Aerospace Center. The University of Texas’ Center for Space Research has overall mission responsibility. GeoForschungsZentrum Potsdam is responsible for German mission elements. Science data processing, distribution, archiving and product verification are managed under a cooperative arrangement between JPL, the University of Texas and GeoForschungsZentrum Potsdam. JPL manages U.S. mission elements for NASA's Office of Earth Science, Washington, D.C. NASA's Goddard Space Flight Center, Greenbelt, Md., is responsible for the Earth System Science Pathfinder program, under which Grace was developed. JPL is managed for NASA by the California Institute of Technology, Pasadena.