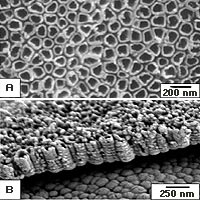 B) Titania nanotubes at 250 nanometer size. Side view.

Titania nanotubes are 1,500 times better than the next best material for sensing hydrogen and may be one of the first examples of materials properties changing dramatically when crossing the border between real world sizes and nanoscopic dimensions, according to a Penn State materials scientist.

"Historically, we have viewed sensor technology and enhancements from the point of view of surface area," says Craig A. Grimes, associate professor of electrical engineering and materials science and engineering. "The principle in play in titania nanotubes is not surface area, but connectivity of the tiny tubes and we see an incredible change in electric resistance."

Hydrogen entering an array of titania nanotubes flows around all the surfaces, but it also splits into individually charged atoms and permeates the surface of the nanotubes. These hydrogen ions provide electrons for conductivity. The change in conductance signals that hydrogen, above the background level, is present.

"Many researchers have tried to use carbon nanotubes as gas sensors, but they do not work very well," says Grimes. "Titania has really great sensitivity and a nice response."

The Penn State researcher notes that the material can be made by the mile and is very cheap as well as very sensitive. The material is also not used up when sensing hydrogen, but once the gas clears from the tubes, can be used again.

Sensors for hydrogen are used in industrial quality control in food plants and as weapons against terrorism. In a bakery, for example, sensors sniff hydrogen and measure temperature to determine when goods are done. Hydrogen sensors are also used in combustion systems of automobiles to monitor pollution and may be used as diagnostic tools to monitor certain types of bacterial infections in infants.

Grimes, working with Oomman K. Varghese, Dawai Gong, Maggie Paulose and Keat G. Ong, postdoctoral fellows, and Elizabeth C. Dickey, associate professor of materials science and engineering, looked at nanotubes of 22 and 76 nanometer diameters. They reported their findings in the Aug. 1 issue of Sensors and Actuators B: Chemical and in a recent issue of Advanced Materials.

"The sensitivity comes from the nanoarchitecture, not the surface area," says Grimes.

The researchers suggest that "the hydrogen molecules get dissociated at the titania surface, diffusing into the titania lattice, and act as electron donors." The researchers believe that this mechanism makes the nanotubes sensitive to hydrogen.

One problem often found in sensors is that they become poisoned, either by the gas they test, or by other gases in the atmosphere, and no longer operate. The researchers tested the titania nanotubes with carbon dioxide, carbon monoxide, ammonia and oxygen finding little interference.

"Our results show that titania nanotube sensors can monitor hydrogen levels from 1 part per million to 4 percent," says Grimes. "Titania nanotubes can be used successfully as hydrogen sensors."