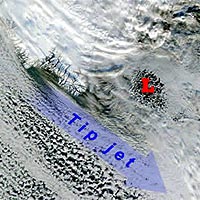 A low pressure system ('L') located east of Cape Farewell triggers the Greenland tip jet. The high wind speeds within the jet forces deep convection in the Irminger Sea to the east of Cape Farewell. This image was taken by the Moderate Resolution Imaging Spectroradiometer onboard NASA's TERRA satellite on Jan. 24, 2001. Image: Kent Moore, U of T Dept. of Physics

A narrow but intense wind may be the mechanism responsible for the existence of a newly discovered ocean convection site east of Greenland, says a U of T scientist.

In earlier research, oceanographers discovered that deep water in the Irminger Sea (east of Greenland) was of similar temperature and salinity to that in the Labrador Sea. The latter is one of only two areas where deep ocean water is traditionally thought to form in the North Atlantic through convection (a process whereby surface water loses heat and moisture, becomes dense, sinks to the bottom and flows towards the equator).

Given the distance involved between the Labrador and Irminger Seas and the time frame studied, the oceanographers knew the water could not have flowed from one site to the other. They asked Professor Kent Moore of U of T's physics department for an explanation. He believes the Irminger Sea has its own convection process triggered by an intense atmospheric jet of very strong winds called the Greenland tip jet. With wind speeds that reach 30 metres per second, the tip jet cools the surface water and makes it more saline, thereby prompting the convection cycle.'

"The interesting thing is not just that we have increased the number of convection sites in the North Atlantic from two to three, which is contrary to previous oceanographic understanding," Moore says. "It is also that these very small tip jets in the atmosphere - only about 100 kilometres wide - can have such a huge impact on the entire ocean, which in turn regulates the Atlantic climatic system."

The research findings are published in the article Deep Convection in the Irminger Sea Forced by the Greenland Tip Jet in the July 10 issue of Nature. Funding support was supplied by the National Science Foundation, Ocean Sciences Division.