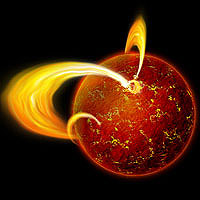 A team of astronomers has discovered a cosmic explosion that seems to have come from the middle of nowhere—thousands of light-years from the nearest galaxy-sized collection of stars, gas, and dust. This 'shot in the dark' is surprising because the type of explosion, a long-duration gamma-ray burst (GRB), is thought to be powered by the death of a massive star. 'Here we have this very bright burst, yet it's surrounded by darkness on all sides,' says Caltech's Brad Cenko, lead author of the team's paper, which has been accepted for publication in The Astrophysical Journal. 'The nearest galaxy is more than 88,000 light-years away, and there's almost no gas lying between the burst and Earth.' The blast was detected on January 25, 2007, by several spacecraft of the Inter-Planetary Network. Observations by NASA's Swift satellite pinpointed the explosion, named GRB 070125 for its detection date, to a region of sky in the constellation Gemini.

News Story Origin and Copyright: Caltech
Click here for the original news release.
'We are all in the gutter, but some of us are looking at the stars.'