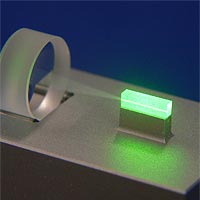 Squeezed light source: a crystal that is illuminated with green light places photons of an infrared laser beam (not visible) in a specific order, thereby reducing the photon noise in that infrared laser.

Researchers at the Max Planck Institute for Gravitational Physics and Leibniz University of Hanover have produced a laser beam of especially high quality. In doing so, they have achieved a new world record in the control of photons by precisely placing the photons in a specific order. This results in a reduction in the quantum mechanical intensity fluctuations, known as photon noise, of 90 percent. Using this extremely quite light in gravitational wave detectors can drastically increase their sensitivity. This so-called squeezed light can also be used in quantum key distribution, where a message is encrypted using a key whose security is guaranteed by quantum mechanics.

Light is not equal to light. There is the everyday light of a light bulb, laser light and squeezed laser light. The latter is particularly valuable since the intensity of the light, the number of photons, is essentially held constant over a certain amount of time. In the everyday light of a light bulb or even in standard laser beams these photons are randomly distributed. This is stipulated by the statistical nature of quantum physics. Similar to a rain shower, where many or just a few rain drops hit the ground, sometimes a bunch of photons arrive and sometimes just one. This fluctuation of the intensity, known as photon noise, perturbs especially sensitive measurements.

Physicists at the Planck Institute for Gravitational Physics (Albert Einstein Institute) and the Leibniz University of Hanover have reduced the photon noise by a factor of 10 (by 90 percent). In the technical parlance, this effect is called squeezing. With that they have set a new world record. Just a few months before, they set another world record when they moved individual photons by up to half a second in a laser beam, so as to achieve a more regular photon distribution. 'The statistical nature of the quantum physics is not violated', according to Roman Schnabel, Junior Professor at the Leibniz University of Hanover and the Max Planck Institute for Gravitational Physics. 'The appearance of photons remains probabilistic, however, we can connect the photons pair wise so that they arrive within regular intervals'. This effect is known as entanglement.

'Using our techniques we can now increase the sensitivity of the gravitational wave detector GEO600', according to Prof. Schnabel. These methods are even being implemented in the larger US-American LIGO detector. With these detectors scientists are hunting down gravitational waves whose detection requires extremely precise measurements. Squeezed light can also be applied to the task of optical data transmission. It could be used to securely transport a secret key because any outside interference with the transmission results in the degradation of the highly ordered sequence of photons. 'We are only at the beginning of investigating the applications to quantum cryptography', according to Prof. Schnabel.

Normally the intensity fluctuations in a laser beam are not apparent because each photon carries a tiny amount of energy. Physicists must look really closely in order to notice the fluctuations. This is exactly what they have done at the Albert Einstein Institute. They inject a laser beam into the gravitational wave detector GEO600 in order to measure extremely small changes in the distance between two mirrors. Their goal is to directly observe gravitational waves from the cosmos. These measurements are so sensitive, that the photon noise of the laser beam is clearly visible.

Crystal as hard drive for light

This is precisely the advantage that squeezed light offers: because of the exceedingly regular intensity of the beam, the interference pattern also remains extremely regular. As a result, the detector becomes more sensitive to weak waves and can probe deeper into space. Gravitational waves are an exciting possibility for astronomers. They are created when massive objects are accelerated, for instance when black holes coalesce or when neutron stars vibrate. Until now there has been no direct detection of gravitational waves due to their weakness. There exist telescopes for these waves, including the German-British gravitational wave detector GEO600, the American detector LIGO and the French-Italian project, VIRGO. Their sensitivity should soon be improved by utilising, amongst other methods, squeezed light. The detection of gravitational waves would allow researchers to observe black holes, probe the innermost structure of neutron stars and unveil the riddle of dark matter. Such objects cannot be detected with normal telescopes.