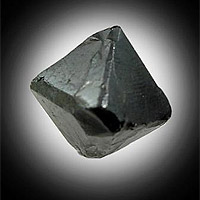 Magnetite is the most abundant magnetic mineral on Earth. It is of great interest to scientists across disiplines. (Image courtesy © John Betts.)

Scientists have discovered that the magnetic strength of magnetite—the most abundant magnetic mineral on Earth—declines drastically when put under pressure. Researchers from the Carnegie Institution’s Geophysical Laboratory, together with colleagues at the Advanced Photon Source of Argonne National Laboratory, have found that when magnetite is subjected to pressures between 120,000 and 160,000 times atmospheric pressure its magnetic strength declines by half. They discovered that the change is due to what is called electron spin pairing.

“Magnetite is found in small quantities in certain bacteria, in brains of some birds and insects, and even in humans,” commented Yang Ding, the study’s lead author with the Carnegie-led High-Pressure Synergetic Consortium. “Early navigators used it to find the magnetic North Pole and birds use it for their navigation. And now it is used in nanotechnology. There is intense scientific interest in its properties. Understanding the behavior of magnetite is difficult because the strong interaction among its electrons complicates its electronic structure and magnetic properties.”

To study the mineral, the researchers developed and applied a novel technique, called X-ray Magnetic Circular Dichroism (XMCD) at the Advanced Photon Source, a high-energy synchrotron facility. The technique uses high-brilliance circularly polarized X-rays to probe the magnetic state of magnetite as a diamond anvil cell subjects a sample to many hundreds of thousands of atmospheres. The researchers combined their experimental results with theoretical calculations by collaborators* to pinpoint why the magnetic strength changes. The study, to be published in February in Physical Review Letters, reveals the electron-spin configuration in the iron sites of the mineral to be the origin of the phenomenon.

This discovery not only shows the profound effects of pressure on magnetism, it also discloses, for the first time, that pressure induced a spin pairing transition that results in changes in the electron mobility and structure.

“The discovery is important,” Ding said. “It advances our understanding of the correlation of magnetism, electron transport, and structural stability in materials with strong electron interactions, like magnetite.”

“It is not surprising to see that a new phenomenon has been trigged by pressure in the oldest magnet. Pressure can directly change electron-electron interactions by squeezing the spacing between them,” said Ho-kwang Mao, the director of the High-Pressure Synergetic Consortium and the High-Pressure Collaborative Access Team. “In the future, the integration of high pressure with novel synchrotron techniques will no doubt lead to more new discoveries.”

News Story Origin and Copyright: CIW
Click here for the original news release.
'On the mountains of truth you can never climb in vain: either you will reach a point higher up today, or you will be training your powers so that you will be able to climb higher tomorrow.'