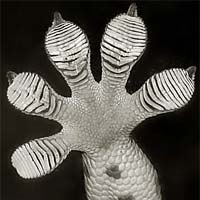 This foot of a Tokay gecko shows its adhesive pads. The gecko, whose feet enable it to cling tightly while upside down or on vertical surfaces, helped inspire a new medical bandage created by an MIT-led research team.

MIT researchers and colleagues have created a waterproof adhesive bandage inspired by gecko lizards that may soon join sutures and staples as a basic operating room tool for patching up surgical wounds or internal injuries.

Drawing on some of the principles that make gecko feet unique, the surface of the bandage has the same kind of nanoscale hills and valleys that allow the lizards to cling to walls and ceilings. Layered over this landscape is a thin coating of glue that helps the bandage stick in wet environments, such as to heart, bladder or lung tissue. And because the bandage is biodegradable, it dissolves over time and does not have to be removed.

The team is led by MIT Institute Professor Robert Langer and Jeff Karp, an instructor of medicine at Brigham and Women's Hospital and Harvard Medical School. Both are also faculty members at the Harvard-MIT Division of Health Sciences and Technology (HST). Their colleagues include several other researchers from MIT, as well as from the University of Basel, Switzerland. In addition, Dr. Jeff Borenstein and David J. D. Carter from Draper Laboratory fabricated the nanomolds involved in the work, and Jay Vacanti and Cathryn Sundback performed all animal experiments with colleagues at Massachusetts General Hospital.

The work is described in the Feb. 11 online issue of the Proceedings of the National Academy of Sciences.

'There is a big need for a tape-based medical adhesive,' said Karp. For instance, a surgical adhesive tape made from this new material could wrap around and reseal the intestine after the removal of a diseased segment or after a gastric bypass procedure. It could also patch a hole caused by an ulcer. Because it can be folded and unfolded, it has a potential application in minimally invasive surgical procedures that are particularly difficult to suture because they are performed through a very small incision.

Gecko-like dry adhesives have been around since about 2001 but there have been significant challenges to adapt this technology for medical applications given the strict design criteria required. For use in the body, they must be adapted to stick in a wet environment and be constructed from materials customized for medical applications. Such materials must be biocompatible, meaning they do not cause inflammation; biodegradable, meaning they dissolve over time without producing toxins; and elastic, so that they can conform to and stretch with the body's tissues.

The MIT researchers met these requirements by building their medical adhesive with a 'biorubber' invented by Karp, Langer and others. Using micropatterning technology--the same technology used to create computer chips--the researchers shaped the biorubber into different hill and valley profiles at nanoscale dimensions. After testing them on intestinal tissue taken from pigs, they selected the stickiest profile, one with pillars spaced just wide enough to grip and interlock with the underlying tissue.

Karp then added a very thin layer of a sugar-based glue, to create a strong bond even to a wet surface. The resulting bandage 'is something we never expect to remove,' said Karp. Because of that difference, he continued, 'we're not mimicking the gecko'--which has sticky feet but can still lift them up to walk--'we are inspired by the gecko to create a patterned interface to enhance the surface area of contact and thus the overall strength of adhesion.'

When tested against the intestinal tissue samples from pigs, the nanopatterned adhesive bonds were twice as strong as unpatterned adhesives. In tests of the new adhesive in living rats, the glue-coated nanopatterned adhesive showed over a 100 percent increase in adhesive strength compared to the same material without the glue. Moreover, the rats showed only a mild inflammatory response to the adhesive, a minor reaction that does not need to be overcome for clinical use.

Among other advantages, the adhesive could be infused with drugs designed to release as the biorubber degrades. Further, the elasticity and degradation rate of the biorubber are tunable, as is the pillared landscape. This means that the new adhesives can be customized to have the right elasticity, resilience and grip for different medical applications.

'This is an exciting example of how nanostructures can be controlled, and in so doing, used to create a new family of adhesives,' said Langer.

The work was funded by the National Institutes of Health, the Materials Research Science and Engineering Center (MRSEC) program of the National Science Foundation, and the MIT-Portugal program.