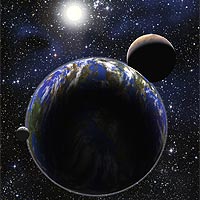 CfA astronomers are developing a new device that may be the first to spot Earth-like planets, like the hypothetical world with two moons shown in this artist's concept. The 'astro-comb' uses a laser to provide an ultrasensitive way of measuring a distant star's wobbling motion, which is induced by an orbiting planet. Credit: David A. Aguilar (CfA)

The leading method of finding planets orbiting distant stars spots mostly Jupiter-sized worlds. Technology limitations make it difficult to detect smaller planets. But that is about to change. A revolutionary laser technology being developed by scientists and engineers at the Harvard-Smithsonian Center for Astrophysics (CfA), with colleagues at MIT, will enable scientists to spot Earth-sized worlds in Earth-like orbits.

'We are at the cusp of a new era in planet searches,' said CfA astrophysicist Chih-Hao Li. 'With this technology we are developing, astronomers will finally be able to find the first truly Earth-like worlds in terms of size and orbit.'

This research is published in April 3, 2008, issue of the journal Nature.

Planets orbiting other stars are much too faint and far away to be seen directly and photographed. Instead, astronomers must look for the planet's effect on its star.

While the gravity of a star tugs on a planet and holds the planet in orbit, the planet's gravity also tugs on the star. That tug makes the star wobble slightly back and forth. If the wobble is along our line of sight, then sensitive instruments called spectrographs may be able to detect it.

The size of the wobble depends on the planet's heft (mass) and its distance from the star. The larger the mass of the planet, the bigger the star's wobble will be, making larger planets easier to detect. At the same time, a planet in a tight, short-period orbit is easier to find than one in a wide, long-period orbit.

Current technology, although very stable and sensitive, isn't quite up to the task of finding Earths. The best instruments can only find 5-Earth-mass planets in tight, Mercury-like orbits.

The new device developed by Li and his colleagues, called an astro-comb, will be able to spot Earth-mass planets in Earth-like orbits. It uses ultrashort, femtosecond (one millionth of one billionth of a second) pulses of laser light, linked to an atomic clock, to provide a precise standard against which light from a star can be measured.

The astro-comb can make measurements accurate to one part in a trillion. This may increase the resolution of the wobble planet-hunting technique by about 100 times, which would allow astronomers to detect Earth-sized planets.

A prototype astro-comb will be tested this summer at CfA's Mount Hopkins Observatory in Arizona. Those tests will be used to refine the design. An improved astro-comb is destined for a project being built in the Canary Islands called the New Earths Facility. The researchers expect it to be operational sometime in 2010.