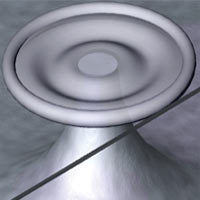 In a new development that could be useful for future electronic devices, applied physicists at the California Institute of Technology have created a tiny disk that vibrates steadily like a tuning fork while it is pumped with light. This is the first micro-mechanical device that has been operated at a steady frequency by the action of photons alone.

Reporting in recently published issues of the journals Optics Express (July 11) and Physical Review Letters (June 10 and July 11), Kerry Vahala and group members Hossein Rokhsari, Tal Carmon, and Tobias Kippenberg, explain how the tiny, disk-shaped resonator made of silica can be made to vibrate mechanically when hit by laser light. The disk, which is less than the width of a human hair, vibrates about 80 million times per second when its rim is pumped with light.

According to Vahala, who is the Jenkins Professor of Information Science and Technology and Professor of Applied Physics, the effect is due to properties of the disk that allow it to store light very efficiently, and also to the fact that light exerts 'radiation pressure.' In much the same way that NASA's solar sails will catch photons from the sun to power spaceships to other worlds, the disk builds up light energy so that the disk itself swells.

'The light makes hundreds of thousands of orbits around the rim of the disk,' Vahala explains. 'This causes the disk to literally stretch, owing to the radiation pressure of the photons.'

Once the disk has inflated, its physical properties change so that the light energy is lost, and the disk then deflates. The cycle then repeats itself, and this repetition continues in a very orderly fashion as long as the light is pumped into the disk.

In effect, this repetitive process makes the disk a very efficient clock, somewhat similar to the quartz crystal that is made to vibrate from electrical current for the regulation of a battery-powered wristwatch. The differences between the optically driven clock and the traditional electrical one, however, create a design element that could provide new electro-optic functions within the context of integrated circuits.

The researchers also note that whereas the basic operation of the device can be understood at the classical level, such a device could be used to study interactions between radiation and macroscopic mechanical motion at the quantum level. Several groups have already proposed theoretically using radiation pressure as a mechanism to investigate such interactions.

Also, the device could be of help in designing the next-generation Laser Interferometer Gravitational-Wave Observatory (LIGO). A National Science Foundation-funded project operated by Caltech and MIT, LIGO and has been created to detect the phenomenon known as gravitational waves, predicted by Einstein decades ago.

LIGO is designed in such a way that laser light bounces between mirrors along a five-mile right-angle circuit. The light is allowed to build up in the two arms of the detector so as to increase the possibility that gravitational waves will eventually be detected from exotic astrophysical objects such as colliding black holes and supernovae.

But designers have been concerned to ensure that the same radiation-pressure-driven instability does not appear in the LIGO system as its sensitivity is boosted. The work by the Vahala group, though at a vastly smaller size scale, therefore could be of help in the current plans for improvement of the LIGO detectors in Hanford, Washington and Livingston, Louisiana.

'This work demonstrates a mechanism that needs to be understood better,' Vahala explains. 'It has moved from theory to existence, and that is always exciting.'