Tandem Ions May Lead the Way to Better Atomic Clocks 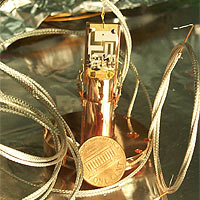 NIST researchers trapped aluminum and beryllium ions in the device above in experiments designed to produce an atomic clock that could be significantly more precise than today’s most accurate atomic clocks.

Physicists at the Commerce Department’s National Institute of Standards and Technology (NIST) have used the natural oscillations of two different types of charged atoms, or ions, confined together in a single trap, to produce the “ticks” that may power a future atomic clock.

As reported in the July 29 issue of Science,* the unusual tandem technique involves use of a single beryllium ion to accurately sense the higher-frequency vibrations of a single aluminum ion. The NIST group used ultraviolet lasers to transfer energy from the aluminum’s vibrations to a shared “rocking” motion of the pair of ions, and then detected the magnitude of the vibrations through the beryllium ion. The new technique solves a long-standing problem of how to monitor the properties of an aluminum ion, which cannot be manipulated easily using standard laser techniques.

The tandem approach might be used to make an atomic clock based on optical frequencies, which has the potential to be more accurate than today’s microwave-based atomic clocks. It may also allow simplified designs for quantum computers, a potentially very powerful technology using the quantum properties of matter and light to represent 1s and 0s.

“Our experiments show that we can transfer information back and forth efficiently between different kinds of atoms. Now we are applying this technique to develop accurate optical clocks based on single ions,” said Till Rosenband of NIST’s laboratories in Boulder, Colo.

Today’s international time and frequency standards measure naturally occurring oscillations of cesium atoms that fall within the frequency range of microwaves, about 9 billion cycles per second. By contrast, optical frequencies are about 100,000 times higher, or about one quadrillion cycles per second, thus dividing time into smaller units. Aluminum may offer advantages over other atoms, such as mercury, being considered for optical atomic clocks.

Building a clock based on aluminum ions has been impractical until now because this atom fails to meet three of four requirements. It does oscillate between two different energy states at a stable, optical frequency that can be used as a clock reference. However, aluminum cannot be cooled with existing lasers, and its quantum state is difficult to prepare and detect directly. The Science paper describes how beryllium—a staple of NIST research on time and frequency standards as well as quantum computing—can fulfill these three requirements while the aluminum acts as a clock.

In the NIST experiments, the two ions were confined close together in an electromagnetic trap. The beryllium ion was laser cooled and slowed to almost absolute zero temperature, which helped to cool the adjacent aluminum ion. Then the scientists used a different laser to place the aluminum ion in a special quantum state called a “superposition,” in which, due to the unusual rules of quantum physics, the ion is in both of its clock-related energy levels at once. More laser pulses were used to convert this clock state into a rocking motion, which—because of the physical proximity of the two ions and the interaction of their electrical charges—was shared by the beryllium ion. As the two ions rocked together in a coordinated fashion, scientists applied two additional laser beams to convert this motion into a change in energy level of the beryllium ion, which was then detected.

When the information is transferred between the two ions, they are briefly “entangled,” another unusual phenomenon of quantum physics in which the properties of physically distinct particles are correlated. A logic operation borrowed from quantum computing was used to transfer the aluminum’s quantum state to the beryllium. Logic operations are similar to “if/then” statements in which the outcome depends on the initial state. For instance, if the aluminum’s original state was at the lowest energy level, then no information was transferred. But if the original state was at a higher level, then energy was transferred to the beryllium in a proportional amount.

By repeating the experiment many times, with different laser frequencies creating a variety of superposition states in the aluminum, scientists could determine its “resonant” or characteristic frequency extremely accurately. This is the frequency of an internal vibration of the aluminum atom, which can be used as the “ticks” of an atomic clock.

The tandem technique could be used to investigate the potential of various atoms, such as boron and helium, for use in optical atomic clocks, according to the paper. The technique also could be used in quantum computing experiments to distribute information between different types of ions or atoms. Because different atoms respond to different frequencies of light, this could improve control of ions or atoms within a potential future quantum computer. Information about NIST research in this field is available at http://qubit.nist.gov.

The work described in Science was supported in part by the Office of Naval Research and the Advanced Research and Development Activity/National Security Agency.