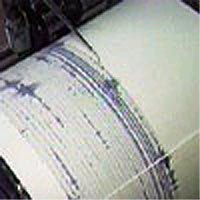 In trying to predict where earthquakes will occur, few people would think to look at Earth's gravity field. What does the force that causes objects to fall to the ground and the moon to orbit around the earth have to do with the unpredictable ground trembling of an earthquake?

Now, researchers at the California Institute of Technology have found that within subduction zones, the regions where one of the earth's plates slips below another, areas where the attraction due to gravity is relatively high are less likely to experience large earthquakes than areas where the gravitational force is relatively low.

The study, by Caltech graduate student Teh-Ru Alex Song and Associate Professor of Geophysics Mark Simons, will appear in the August 1 issue of the journal Science.

Until now, says Simons, researchers studying earthquake behavior generally took one of four approaches: 1) analyzing seismograms generated by earthquakes, 2) studying frictional properties of various types of rock in the laboratory or in the field, 3) measuring the slow accumulation of strain between earthquakes with survey techniques, and 4) large-scale dynamic models of earthquakes and tectonics.

Instead of using one of these approaches, Song and Simons considered variations in the gravity field as a predictor of seismic behavior.

A gravity anomaly occurs when gravity is stronger or weaker than the regional average. For example, a mountain or an especially dense rock would tend to increase the nearby gravity field, creating a positive anomaly. Likewise, a valley would tend to create a negative anomaly.

Song and Simons examined existing data from satellite-derived observations of the gravity field in subduction zones. Comparing variations in gravity along the trenches with earthquake data from two different catalogs going back 100 years, the team found that, within a given subduction zone, areas with negative gravity anomalies correlated with increased large earthquake activity. Areas with relatively high gravity anomalies experienced fewer large earthquakes.

Song and Simons also compared the location of large earthquakes with the topography of the subduction zones, finding that areas of low topography (such as basins) also corresponded well to areas with low gravity and high seismic activity.

So why would gravity and topography be related to seismic activity?

In addition to deforming the plates, friction causes stress to build up. When too much stress builds up, the plates will suddenly jump, releasing the strain in the sometimes violent shaking of an earthquake.

If there were no friction between the plates, they would just slide right by each other smoothly, without bending or building up the strain that eventually results in earthquakes.

Though this account provides a basic explanation for a rather complicated and unintuitive phenomenon, it is a simplified view, and Song and Simons would like to do more work to refine the details of the relation between the gravity field and large earthquakes.

The gravity anomalies the team considered take a long time to build up, and change very little over timescales up to at least 1 million years. Short-term events such as earthquakes do change the gravity field as the earth's plates suddenly move, but those variations are small compared with the long-term anomalies, which are on the order of 4 x 10^-4 m/s^2.

Because topography and gravity variations persist over periods of time much longer than the typical time between earthquakes, 100 to 1,000 years, large earthquakes should be consistently absent from areas with large positive gravity anomalies, say Song and Simons.

Though no one can tell when or where the next major earthquake will occur, Global Positioning System measurements can show where strain is accumulating. Simons hopes to use such measurements to test the prediction that areas with high gravity will have low strain, and vice versa.

The team points out that although large earthquakes occur where gravity and topography are low, there are low-gravity areas in subduction zones with no seismic activity. Furthermore, the research concentrates on subduction zones, and so makes no predictions about other types of faults.

Nonetheless, within a subduction zone known to be earthquake-prone, Simons believes earthquakes are more likely to occur in low-gravity zones. High gravity areas do tend to have few earthquakes. So while the research does not offer a way to predict where earthquakes will happen, it can predict where they won't happen, says Simons.