Hot spots on Mars give hunt for life new target 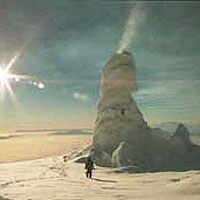 Giant hollow towers of ice formed by steaming volcanic vents on Ross Island, Antarctica are providing clues about where to hunt for life on Mars.

University of Melbourne geologist, Dr Nick Hoffman has found evidence from recent infra-red images of Mars that similar structures may exist on Mars and, if life is to be found, such towers may be best place to start looking.

Hoffman has drawn attention to strange temperature anomalies in these latest Mars images taken with an infra-red heat-sensing camera on the Mars Odyssey orbiter. These anomalies, he says, fit the signature you might expect from structures formed in similar ways to the Antarctica ice towers.

"If these thermal anomalies don’t prove to be another of Mars’ 'red herrings', the search for water and life on Mars now has a clear focus. While I believe Mars is actually lifeless, ice towers rather than the current acclaimed river channels are the most likely place to find signs of water activity, and hence life, on an otherwise frozen planet," says Hoffman.

Mt Erebus is a 3800 metre active volcano on Antarctica’s Ross Island. Here, steaming volcanic vents transform steam directly into ice, missing the normal in-between step of liquid water. Instead, all of the water is transported as vapour directly from snow and ice in the ground (permafrost) to build tall hollow chimneys of ice, that loom over the landscape up to 10m tall.

It is possible to climb down the inside the chimneys where the filtered sunlight creates an eerie blue dimness. In this cave-like grotto, away from the howling wind, there exists a local microclimate gently warmed by the volcanic heat beneath.

The internal temperatures of the towers hover around freezing, but are often tens of degrees warmer than the outside air. Delicate curtains of snowflakes and icicles hang from the roof. The floor is dry crunchy gravel, dried out by volcanic warmth, but occasionally a warm spell leads to drips melting from the roof.

"Earth Bacteria can thrive in this sheltered spot, despite the traces of volcanic gas," says Hoffman.

"On Mars, similar structures would be doubly valuable for potential Mars microbes. The icy structure of the chimney would filter out harmful Ultra-Violet radiation, and provide warmth and shelter. Meanwhile, the volcanic gases could provide chemical energy for primitive forms of life like those that live in hot springs on earth," he says.

The strange temperature anomalies picked up by the orbiter are in an area of Hellas Basin, a massive impact basin about the size of Australia in the southern Hemisphere of Mars.

"Debate continues about the anomalies which might only be odd rock formations, but they are definitely 8 to 12 degrees warmer than the surrounding materials both day and night, so warmth from the sun cannot be responsible for their anomalous temperature," says Hoffman.

"Some special combination of sunshine, reflectivity, and cementation is required to explain these temperatures in any other way, and this combination, whilst possible, is unlikely," he says.

"We anticipate that such towers, if they exist on Mars, could grow up to 30 metres tall under the lower gravity. The geothermal hotspots over which a tower might exist are unlikely to produce liquid water, unless they are exceptionally active or newly formed where the extensive permafrost of Mars might melt for the first and only time. Instead the hotspot would drive the water vapour upwards forming a similar grotto-chimney type of ice tower as found on Mt Erebus.

Until now, NASA scientists have thought deep gullies discovered in 2001 to be the most promising candidates for liquid water flows on modern Mars. Many NASA researchers have suggested ways in which they might be formed by liquid water.

"The problem is nobody has seen water flowing in the gullies," says Hoffman.

Rather than water, Hoffman’s recent research shows the gullies are more likely to be formed by avalanches of frozen carbon dioxide and other debris.

NASA is desperate to find signs of liquid water on Mars so they have a target for the next generation of Mars landers and rovers to go and search for life, but their search could prove fruitless if Hoffman’s research and analysis is correct.

"The ice towers are the best bet for life, so far," he says.