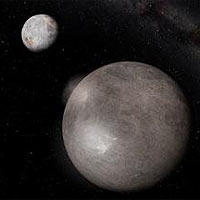 Frigid geysers spewing material up through cracks in the crust of Pluto’s companion Charon could be making this distant world into the equivalent of an outer solar system ice machine.

“There are a number of mechanisms that could explain the presence of crystalline water ice on the surface of Charon,” said Jason Cook, a doctoral student in the School of Earth and Space Exploration at Arizona State University who led a team of planetary scientists studying the surface of Charon. “Our spectra point consistently to cryovolcanism, which brings liquid water to the surface, where it freezes into ice crystals. That implies that Charon’s interior possesses liquid water.”

To reach this conclusion, Cook and his collaborators studied a number of other mechanisms that could explain the presence of water ice crystals on Charon. The only mechanism that explained the data was cryovolcanism, the eruption of liquids and gases in an ultra-cold environment.

Cryovolcanism in the outer solar system is a fairly common occurrence. Enceladus (a moon of Saturn) and Europa (orbiting Jupiter) both show evidence of water ice oozing or spewing out from beneath the surfaces.

This discovery could have profound implications for other similar-type worlds in the Kuiper Belt – the region of the solar system that extends out beyond the orbit of Neptune and contains a number of small bodies, the largest of which include Pluto and Charon.

The team’s intent was to find evidence of methane, carbon dioxide, ammonia, and a form of ammonia called ammonia hydrate on the surface of Charon, which has also been reported on Quaoar and suspected on at least one other Kuiper Belt Object.

According to ASU assistant professor Steven Desch, Cook’s colleague and thesis advisor, ammonia hydrates help keep liquid water from freezing solid, making it easier for water to escape from the inside before it turns to ice. “It is literally an antifreeze,” he said, “and like the antifreeze we’re familiar with here on Earth, it depresses the melting point of water.”

Cook and his colleagues concentrated their observations on Charon’s anti-Pluto and sub-Pluto hemispheres. Their findings were published in the paper “Near-infrared Spectroscopy of Charon: Possible Evidence for Cryovolcanism on Kuiper Belt Objects” in volume 663 of The Astrophysical Journal. In addition to Cook and Desch, the team included Ted L. Roush (NASA Ames Research Center), and Chad Trujillo and Tom Geballe (Gemini Observatory).