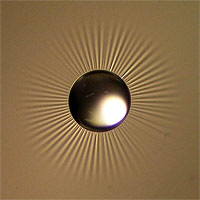 A starburst of wrinkles form in a thin film material when a drop of water is placed on the film as it floats in water. These remarklably simple experiments, done with a pool of water in a Petri dish and a low-magnification microscope, give researchers insight into whether the material properties of ultrathin films differ from their properties in bulk quantities.

A remarkably simple experiment devised by scientists yields important information about the mechanical properties of thin films--nanoscopically thin layers of material that are deposited onto a metal, ceramic or semiconductor base.

The research results, funded by the National Science Foundation and performed at the University of Massachusetts at Amherst Materials Research Science and Engineering Center, appears in the August 3, 2007, issue of Science.

The findings impact a broad range of scientific disciplines and applications, from cosmetics to coatings, to micro- and nanoelectronics. Understanding the mechanical properties of thin films is essential to their performance and optimization.

Until now, determining the mechanical properties of these thin films was either an expensive and time-consuming endeavor, requiring powerful microscopes to view the films, or scientists examined composite structures and made uncertain assumptions. This new research will give scientists a simple way to access the material properties of most thin films.

"As we delve more into the nanotechnology, it becomes increasingly important to know if the material properties of ultrathin films differ from their properties in the bulk," said Thomas Russell, a program director in the Polymer Science and Engineering Department at the University of Massachusetts in Amherst. "Everyday we see examples where a material's dimensions can change its properties. Aluminum foil is flexible, whereas a bar of aluminum is not. But what happens when a film's thickness approaches molecular dimensions? These experiments give us a simple, inexpensive way to measure mechanical properties of films that are only tens of nanometers thick."

Russell and his colleagues use a low-power optical microscope to observe what happens when they place a tiny drop of water on thin film as it floats in a Petri dish of water. The "capillary tension" of the drop of water produces a starburst of wrinkles in the film. The number and length of the wrinkles are determined by the elasticity and thickness of the film.

In some of the materials studied, the wrinkles in the ultrathin polymer films vanished with time, unlike the skin of a dried fruit or the crumpled hood of your car after an accident. This vanishing provides insight into the relaxation process of an ultrathin film by yielding information on the way polymer chains move in the highly confined geometry.