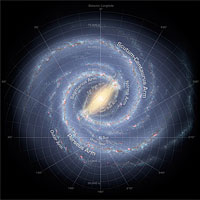 This artist's concept illustrates the latest view of the Milky Way's structure. The galaxy's two major arms (Scutum-Centaurus and Perseus) can be seen attached to the ends of a thick central bar, while the two now-demoted minor arms (Norma and Sagittarius) are less distinct and located between the major arms. The major arms consist of the highest densities of both young and old stars; the minor arms are primarily filled with gas and pockets of star-forming activity. The artist's concept also includes a new spiral arm, called the 'Far 3-kiloparsec arm,' discovered via a radio-telescope survey of gas in the Milky Way. This arm is shorter than the two major arms and lies along the bar of the galaxy. It is a virtual twin to the well-known 'Expanding 3-kiloparsec arm' on the near side of the galactic center.

We live in the Milky Way galaxy - a disk-shaped collection of about 400 billion stars including the Sun. Many of those stars and much of the dense gas between the stars concentrate into large arms that spiral outward from the galactic center.

Tom Dame of the Harvard-Smithsonian Center for Astrophysics (CfA) presented this finding today in a press conference at the 212th American Astronomical Society meeting.

'Our galaxy isn't as messy as many thought. What we have found is evidence of some balance and order, like the yin and yang of Chinese philosophy,' said Dame.

The Milky Way has other, larger spiral arms farther out in the galactic disk. This study focuses on the two arms closest to the center of the galaxy.

They suspected a similar arm might exist on the far side of the Milky Way, since many other galaxies tend to be symmetrical. But for decades, they were unable to find any evidence for a far-side counterpart of the expanding 3-kpc arm. One reason is that the galactic center is so crowded, with many different hydrogen gas clouds overlapping the same patch of sky.

'Studying the galactic center is like listening to a conversation in the middle of a crowded cocktail party. There's lots of noise,' said Dame's CfA colleague Patrick Thaddeus.

When Dame processed the data to highlight large-scale structures very close to the plane of the galaxy, a new feature jumped out at him. The data clearly showed a spiral arm exactly where the far 3-kpc arm should be, with properties like radius, expansion velocity, mass, and brightness that were mirror images of the near 3-kpc arm.

Dame and Thaddeus suspect that the 3-kpc spiral arms are linked to the galactic bar. At the center of the Milky Way, billions of stars inhabit an elongated conglomeration called a stellar bar, which extends for several thousand light-years on either side of the galactic center. As that central bar rotates, it produces large-scale shock waves that likely sculpt the 3-kpc spiral arms and power their outward motions. In fact, theorists believe that those spiral arms connect to the ends of the bar.

'The 3-kiloparsec arms are a natural result of the stellar bar,' explained Thaddeus. 'We expected that the bar should drive symmetric structure. Now, we have proof that it does.'

Dame and Thaddeus confirmed their discovery using 21-centimeter radio measurements of atomic hydrogen collected by colleagues in Australia. Next, they plan to apply for observing time on the Robert C. Byrd Green Bank Telescope to examine the 3-kpc spiral arms in more detail. They also want to extend their observations to greater galactic longitudes as seen from Earth.

'We want to see how far we can chase these arms - hopefully to their origins at the ends of the central bar,' said Dame.