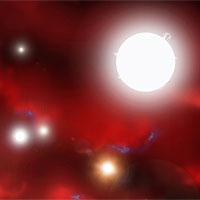 The first primordial stars began as tiny seeds that grew rapidly into stars one hundred times the mass of our own Sun. Seen here in this artist impression, swirling clouds of hydrogen and helium gasses are illuminated by the first starlight to shine in the Universe. In the lower portion of the artwork, a supernova explodes ejecting heavier elements that will someday be incorporated into new stars and planets.

The universe began with the Big Bang about 13.7 billion years ago. Very soon after that event, the first stars formed. Today, those stars are dead and gone leaving little evidence of their size and composition behind. Now, a new computer simulation now offers the most detailed picture yet of how these first stars came into existence. These findings will be published by the journal Science on Friday, 1 August. The composition of the early universe was quite different from that of today, and the physics that governed the early universe were also somewhat simpler. Dr. Naoki Yoshida, Nagoya University in Nagoya, Japan and co-author Dr. Lars Hernquist at the Harvard-Smithsonian Center for Astrophysics in Cambridge, MA, incorporated these conditions of the early universe, sometimes referred to as the 'cosmic dark ages,' to simulate the formation of an astronomical object that would eventually shine as a star.

According to their simulations, gravity acted on minute density variations in matter, gases, and the mysterious 'dark matter' of the universe after the Big Bang in order to form the early stages of a star called a protostar. With a mass of just one percent of our Sun, Dr. Yoshida's simulation also shows that the protostar would likely evolve into a massive star capable of synthesizing heavy elements, not just in later generations of stars, but soon after the Big Bang. These stars would have been up to one hundred times as massive as our Sun and would have burned for no more than one million years. 'This general picture of star formation, and the ability to compare how stellar objects form in different time periods and regions of the universe, will eventually allow investigation in the origins of life and planets,' said Hernquist.

'The abundance of elements in the Universe has increased as stars have accumulated,' he says, 'and the formation and destruction of stars continues to spread these elements further across the Universe. So when you think about it, all of the elements in our bodies originally formed from nuclear reactions in the centers of stars, long ago.' Their simulation of the birth of a protostar in the early universe signifies a key step toward the ambitious goal of piecing together the formation of an entire primordial star and of predicting the mass and properties of these first stars of the universe. More powerful computers, more physical data, and an even larger range will be needed for further calculations and simulations, but these researchers hope to eventually extend this simulation to the point of nuclear reaction initiation – when a stellar object becomes a true star.

'Dr. Yoshida has taken the study of primordial star formation to a new level with this simulation, but it still gets us only to the halfway point towards our final goal. It is like laying the foundation of a skyscraper,' said Volker Bromm, Assistant Professor of Astronomy at the University of Texas, Austin and the author of a companion article. 'We must continue our studies in this area to understand how the initially tiny protostar grows, layer by layer, to eventually form a massive star. But here, the physics become much more complicated and even more computational resources are needed.'